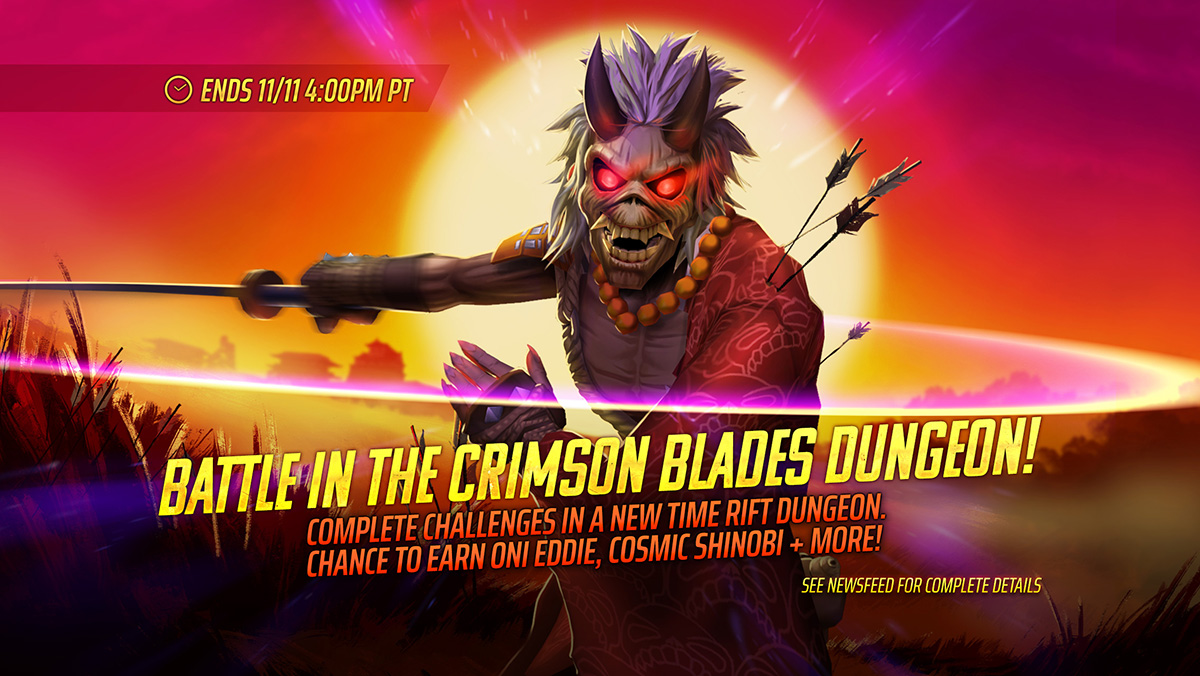 04 Nov Battle in the Crimson Blades Dungeon for 4 New Characters including Oni Eddie!

Oni Eddie is making his Legacy of the Beast debut!

Cut enemies down to size with lethal precision. Oni Eddie is a 5★ Assassin who deals magic damage and can remove a variety of beneficial effects. His Fury attack removes negative effects from allies, deals out MASSIVE damage to a single target and places Oni Eddie’s sword in an Empowered State. While Empowered Oni Eddie will continue to remove negative effects, grant Ascension and Magic Penetration to allies, and will even revive fallen teammates with full health!

From now until November 11th, 4 PM PT, wield your sword and prepare to conquer the Crimson Blades dungeon! This Dungeon comes with 4 difficulty settings and is packed with awesome rewards!

The first time you complete Normal, Hard or Madness, you will be granted with set rewards including Demonic Souls and Yin Talismans. Beat Insanity to earn a host of other rare set rewards including a Catalyst Soul, T3 Evo Runes and Talisman Epic Soul Fragments. All subsequent victories are [b]guaranteed[/b] to provide rare Assassin Soul Fragments, as well as a chance of up to 2 bonus rewards, including Eclipse Talismans.

Demonic Souls can be earned in one of three ways:

Earn them as first time completion rewards in the Normal, Hard and Madness levels of the Crimson Blade Dungeon
Complete Event Challenges! Getting 200 fragments will earn you a Demonic Soul, with up to 10 Souls that can be earned from challenges over the course of the event.
Get Demonic Souls in store for Ironite in the usual bundle sizes of 1, 3, or 10.

Yang Talismans are yellow Talismans with a 3-set effect. Equip them to gain Immunity to Permadeath, Perfect Death, and Crave effects. The wearer of these talismans will take 50% Reduced damage and heal all allies for 1,000 points of health when you take damage if the Yin Talisman set effect is also active on the wearer.

350 Ingami Or Irigami, Dog Spirit Soul Fragments (Sentinel or Gunner) will create a soul that will give you either the 4★ Sentinel Ingami or Gunner Irigami.

Mitsuko, Cosmic Shinobi (5★ Assassin): Mitsuko is an Awakenable character who is a master of stealth and disarming her opponents. She is able to Vanish, Critically Strike and apply Perfect Sleep to her opponents. This character also has no Talisman Slot restrictions, and will have Class Advantage over every enemy!

Please note that this character is not currently available in any other souls. After this event, Mitsuko, Cosmic Shinobi, will only be featured occasionally in Heroic Soul Rotations. If you miss your chance to recruit her, it may be a very long time until you get another chance!

Irigami, Dog Spirit (4★ Gunner): This party enhancer prevents enemies from taking extra turns and can give allies a variety of beneficial effects, including Trap, Armor Penetration and Attack up!

Ingami, Dog Spirit (4★ Sentinel): A multi-hitter who can revive allies, and will apply Invincibility and Critical Strike Chance to allies if any of his teammates HP is below 50%.