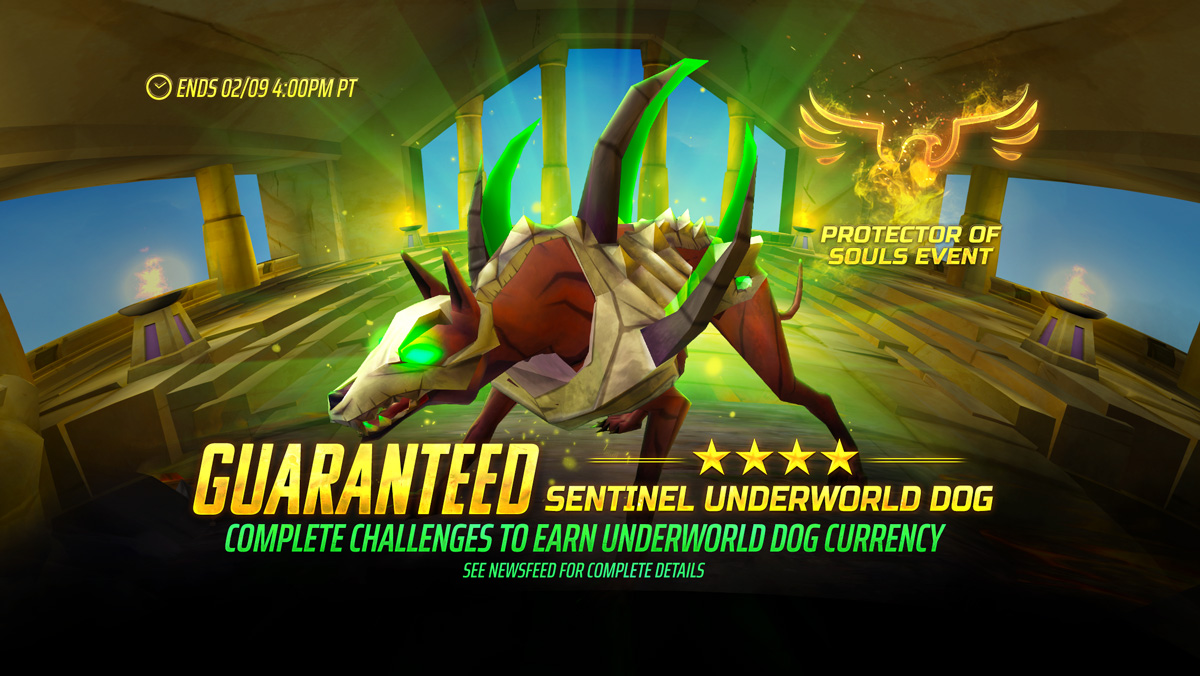 From now until February 9th, 4PM PT, complete individual and Clan event challenges in the Lord of Light and Powerslave Dungeons to earn Underworld Dog Currency.

Unlike previous Ally Events, event currency is earned through event challenges only and does NOT drop in the Lord of Light dungeons.

Collect 200 and you can redeem them in the Event Store for your very own 4⭐Sentinel Underworld Dog!

The Underworld Dog joins the cast as a new 4⭐Sentinel in Legacy of the Beast.  This guardian of the dead starts every turn by awarding his teammates with a random Golden effect. He further supports his allies by giving them Endure, Perfect Immortality, Charge and Extra Turns while striking enemies with physical attacks!

Once you’ve collected her, you’ll be able to trade in any extra Cosmic Lilith Fragments for Talisman Red Mythic Fragments.

Both of these offers will be available during our monthly Ally events.

The Cosmic Nagual Talisman provides an exclusive bonus when equipped to The Nagual, The Witch Doctor, Shaman Eddie and the following upcoming characters: Day of the Dead Eddie, the Spirit Jaguar. This Talisman increases the wearers stats in battle, and reduces incoming damage. It will also give the wearer:

50% Chance to Transform All Beneficial Effects, including Golden effects, on each enemy into a Stun, Freeze or Sleep effect, including Silver and Unblockable effects, and up to 3 Marks for 1 turn at the start of battle and at the start of your turn if you are not at full HP. Gain Immunity and Endure for 2 turns when you take damage. Once per battle, Revive with 10% HP and gain Immunity to Damage for 2 turns.