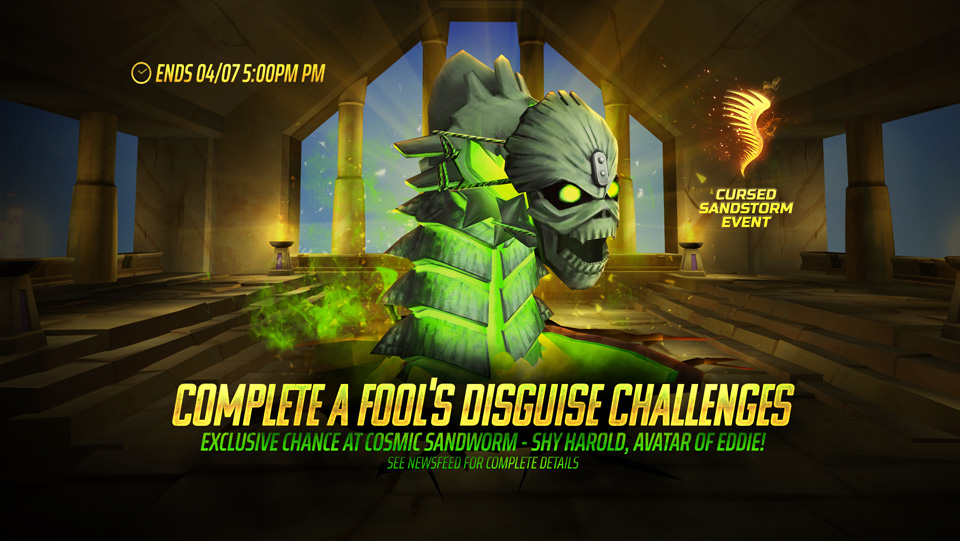 Shy-Harold, devourer of medium-sized creatures and lord of the dune behind the Cosmogian Alehouse was Eddie’s #1 fan. Imagine the elation racing through all seven of Harold’s hearts as he came across a peculiar item: a metal and wooden mask shaped exactly like the Eternal’s face! Finally- Harold could cosplay as his hero! Little did he know, the mask contained a shard of Eddie himself! Upon donning the mask, Shy-Harold the Sandworm became fused with all the powers of Eddie!

Participate in the Fool’s Disguise event to earn Shy-Harold, an awakenable Cosmic Sandworm!

Battle Scarred Blades can be traded in store for Fool’s Souls, Bamboozled Souls and various Cosmic Jester Talisman sets. For those unfamiliar with them, Jester Talismans will rotate their set bonus each time they are evolved. Each Jester Talisman has 3 possible set effects.

The Bamboozled Soul is a limited time event soul which guarantees three 1★ to 2★ characters of any class. It has an increased chance of summoning Sandworm, Hourglass, and Pharaoh Spirit named characters and is guaranteed to give 1 T2 Cosmic Jester Talisman.