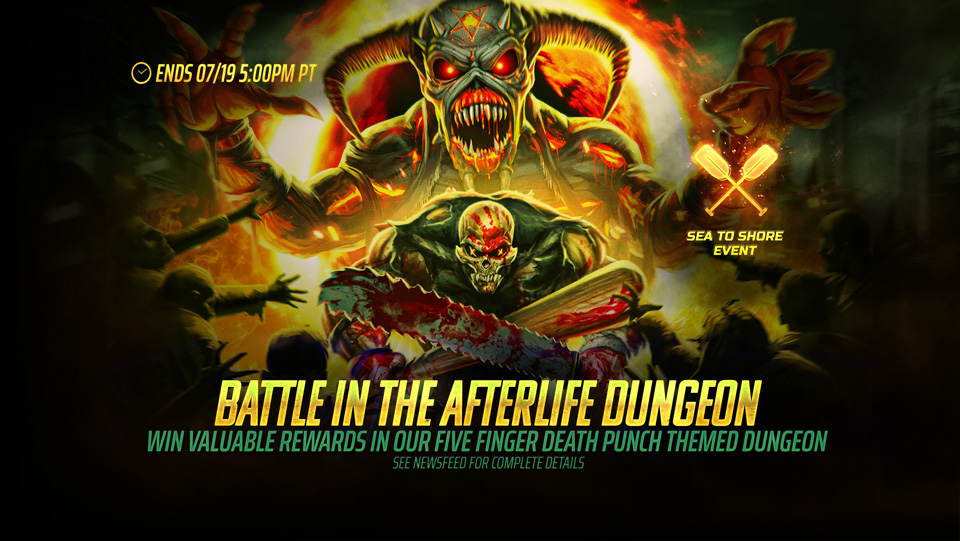 Knucklehead is making his Legacy of the Beast debut. This brutal but courageous warrior has his fists at the ready, punching his way through the enemy forces and countering any foe that dares attack his allies.

You can earn Knucklehead for free just by logging in! Log in any 7 days between July 12th and August 11th to earn awesome rewards including Knucklehead himself on the 7th day!

You can get a look at Knucklehead in action during the Afterlife dungeon event. Available until July 19th at 5PM PT this special dungeon features a Five Finger Death Punch themed script, and 4 difficulty settings with epic rewards. Magma Beast Eddie fights his way through hell with Knucklehead at his side. Can they unite to stop the maelstrom of demons vying to escape!

Hellfire Orbs
Dungeon Fragments
A chance of up to 2 bonus rewards, including: Courage Talismans (Fierce Subtype).

Hellfire Orbs can be traded in store for Abyss Souls in bundles of 1, 3 and 10, plus Cosmic Banshee Talismans!

The Abyss Soul is a limited time event soul which guarantees a 3★ to 5★ character of any class. This soul has an increased chance of summoning Demon Prince of Asmodeus, Steward of Asmodeus, Children of the Damned, Banshee and Derby Demon characters.