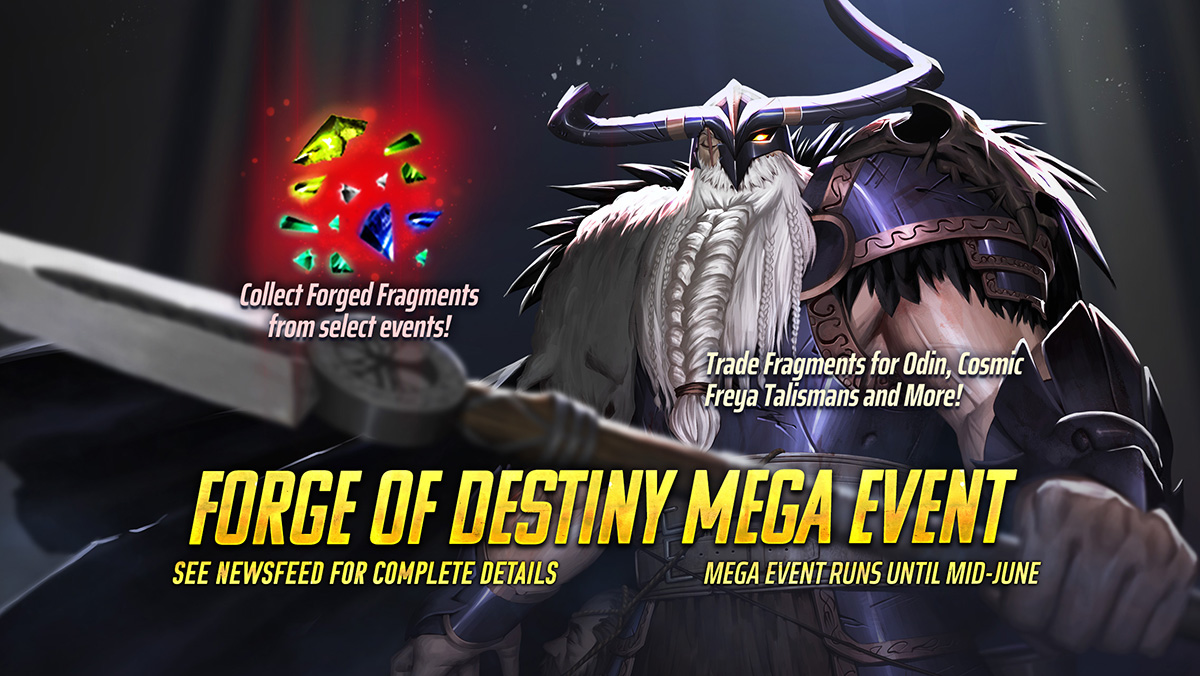 04 Apr Battle for Odin – Forge of Destiny Mega-Event on NOW!

The Forge of Destiny Mega Event is a series of events that will feature a number of collectible characters from a variety of mythologies.

Throughout the course of this event you will be able to collect Forged Fragments which can be traded in for unique items in the Mega Store such as various classes of Odin!

Forge of Destiny Associated events will be running from April through to mid-June. Participate in these events to earn Forged Soul Fragments!

You can trade these Fragments in the Mega store for a wide variety of rare rewards including Cosmic Talismans for Freya, Clan themed Talismans (including Ragnarok, Valhalla and more), and 6 Classes of Odin!

Cosmic Freya Talismans can only be equipped to Freya. This Talisman increases stats in battle, and reduces incoming damage. It will allow her to gain Immunity to Crave, Doom, and Dark Ghost and grants immunity to Permadeath effects, including innate effects. These Talismans also revive Freya with full HP and Remove All Negative Effects, including Silver Effects, and heal each ally to full HP, granting them Invincibility, Heal Amp, and Regen for 1 turn, upon death.

Unleash the power of the Allfather! At the beginning of the Mega Event, 2 Odins will be placed in the store. As the Mega Event progresses other classes of Odin will be added to the store. See the full schedule below:

Once the final 2 Odin’s have been added, there will be no further changes to the Mega Store.

All items in the Mega Store will be available for purchase until June 24th at 5pm PT. Once the mega event is over, the Odins will only be earnable as long-term Raid Boss feature rewards. We’ll provide more details on this after the Forge of Destiny event concludes.

Mega Event Bonus! Throughout the Forge of Destiny Mega Event, Satellite 15 will drop Forged Soul Fragments with every claim! Fragments will typically drop in bundles of 3 or 5, but there is a chance to receive 10 Fragments each Claim!