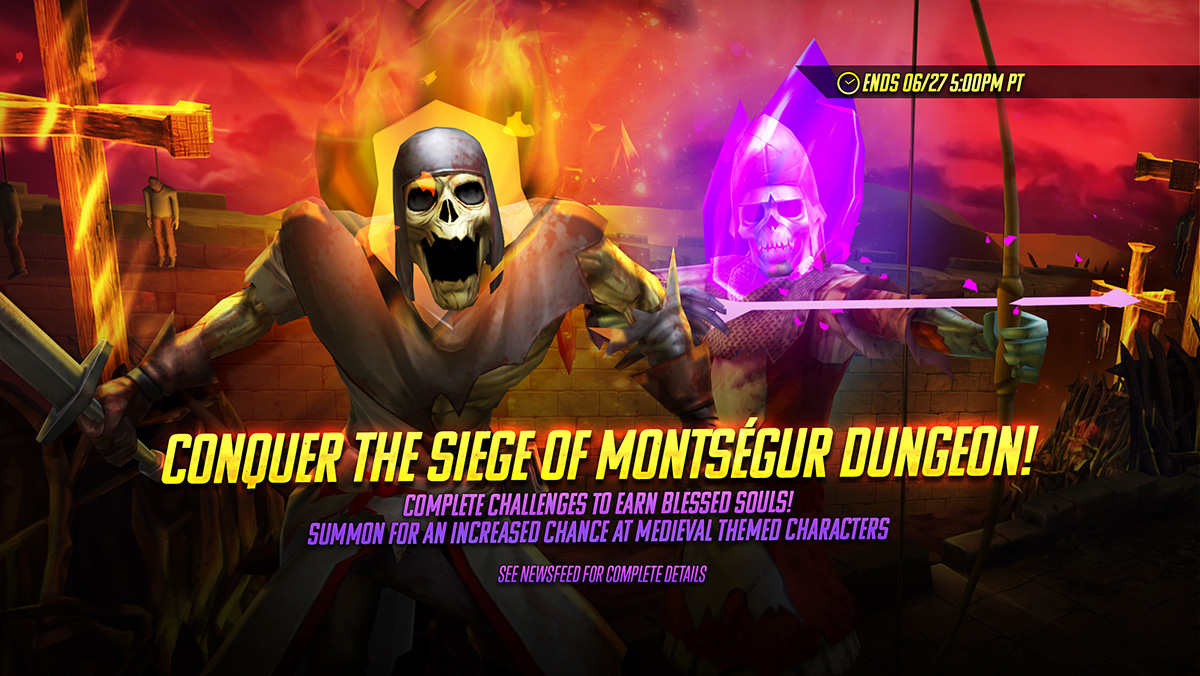 17 Jun Battle in the Siege of Montségur Dungeon for an Increased chance at Medieval Themed Characters!

Battle in the Siege of Montségur dungeon for Medieval Themed Characters, including Crusader Eddie as well as the new Inquisition Archer and Damned Templar Knight!

These medieval warriors are both 3★ and will come in handy for level restricted Frontier Dungeons such as the Airstrip and Gangland Dungeons! The Archer deals physical damage while healing your team and boosting their abilities with beneficial effects. The Damned Knight drains the life out of his opponents by applying a variety of negative effects including Perfect Blood, Flare and Cleave. Learn more about these new additions in the Compendium!

From now until June 27th, 5 PM PT, battle in the Siege of Montségur dungeon! This dungeon comes with 4 difficulty settings and is packed with awesome rewards!

The first time you complete Normal, Hard or Madness, you will earn set rewards including Blessed Souls and Persecution Talismans, and your first Insanity run will grant T3 Cosmic Evo Runes and Talisman Epic Soul Fragments. All subsequent victories are guaranteed to provide Blessed Soul Fragments, and Dungeon Fragments, as well as a chance of up to 2 bonus rewards, including Starfire Talismans.

Blessed Souls can be earned in four ways:

Prudence Talismans are a purple talisman with a 4-set effect. Equipping this set will do the following:

Reduce all damage taken by 10%, increasing by 10% each turn up to a maximum of 90%, at the start of your turn. 35% Chance to take 99% reduced damage when attacked. Inflict Silence, Accuracy Down, or Seal, including their Silver versions, on a random enemy for 2 turns when you take damage. 35% Chance to Cleanse a Random Negative Effect, including Silver Effects and Innate Stun and Freeze effects, from self and a random ally when you take damage. Heal self and a random ally for 10% of your MAX HP for each effect removed this way.