02 Mar Battle to save the Isle of Avalon

The wait is over! Mobile games publisher, Nodding Frog and global rock legends IRON MAIDEN are proud to announce the arrival of the new in-game region ISLE OF AVALON to their award-winning Legacy of the Beast mobile game.

Modeled after the lyrics from the song, ‘Isle of Avalon’ from 2010’s ‘The Final Frontier’ album. The story is centered on the Isle of Avalon, which houses humanity’s fallen and eternal souls. It acts as a direct connection between the realm of humanity, and the realm of the gods. Eddie and The Alchemist head to Avalon to warn them of Lucifer’s attack, but will they be able to stop his plans for vengeance in time?

The Isle of Avalon content will be released in 3 separate parts, and each release will cover the distinct areas that make up Avalon; the misty plains, the castle city/mystic ruins, and the palace of angels. These areas will bring unique environments and enemies for players to face in each release, as well as one Act of the overarching Avalon story, leading off from the cliff-hanger ending of the Awakening story.

In Iron Maiden: Legacy of the Beast, metal and RPG gaming fans take on the role of the band’s iconic mascot, Eddie who travels across a spectacularly diverse array of worlds by traveling through time in captivating 3D environments. Eddie appears in many forms, each a part of Iron Maiden’s rich history, and each with a set of special powers and abilities.

Iron Maiden: Legacy of the Beast, is an action-packed, free-to-play mobile game available on Apple’s App Store and Google Play. 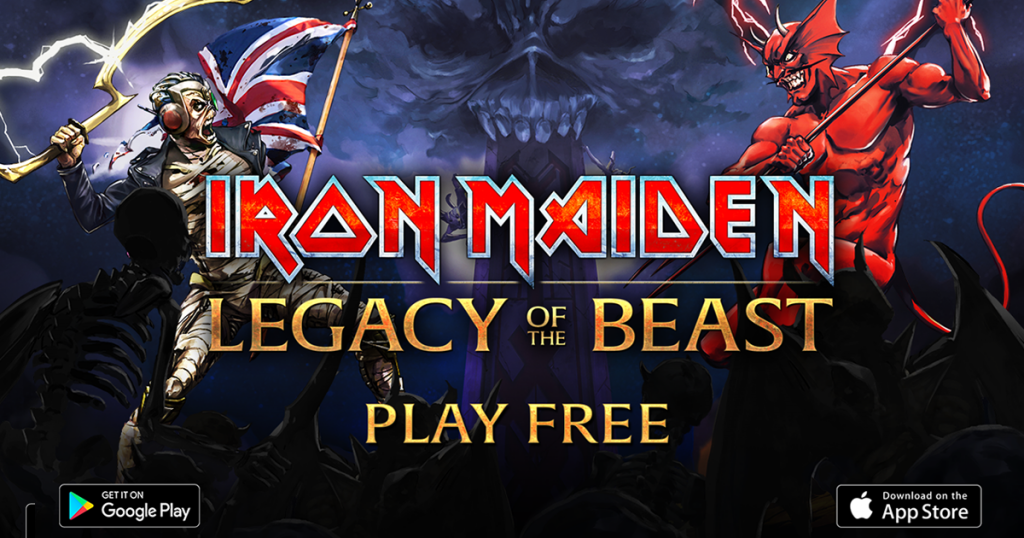 Founded in 2016, Navigator Games is home to a dynamic and enthusiastic team of video game developers based out of Vancouver, Canada. The studio’s mission is to create truly unique and engaging video games that push the boundaries. This talented team is built upon a wealth of experience accumulated from Activision, EA Games, Ubisoft, Microsoft, Disney, GREE, Radical, Hothead, Acronym, Capcom & IUGO. Their main title, Iron Maiden: Legacy of the Beast, celebrated its 4th Anniversary July 2020!

Iron Maiden: Legacy of the Beast first launched in 2016. Players battle as Eddie, Iron Maiden’s famed undead mascot, in his many forms across amazing worlds inspired by Iron Maiden’s rich imagery and music. Eddie’s quest to gather the pieces of his fragmented soul sees him fighting legions of unrelenting enemies and teaming up with powerful heroes pulled straight from Iron Maiden lore. Iron Maiden are intimately involved in character creation and story content, ensuring everything lives up to the Maiden name and brings their vision to life.

Over the years the game has expanded to include 18 dungeons and 5 unique Worlds, from the pits of Hell, Ancient Egypt, World War II to the far future, hundreds of characters including 90 Eddies, a huge array of corrupt Monsters (Vampires, werewolves, banshees), Demons (Lucifer, Baphomet) and Gods (Horus, Osiris, Odin), a bloody battle Arena and a ruthless Gauntlet feature designed to satisfy new players and hardcore long term players. The latest feature ‘Clans’ allows players to join forces with their blood brothers to complete team tasks and face off against monstrous Raid Bosses.

The game also features monthly dungeons and special events where players can participate to earn rare rewards and new characters based on Maiden songs or themes. These have included Halloween Dungeons such as Dracula’s Castle, the demon-infested Infernal Dungeon, and the foreboding Raven’s Altar guarded by the fearsome Raven Witch. November 2020 featured a major event – Limbo of Lost Souls – which launched with Iron Maiden’s latest live album ‘Nights of the Dead “Legacy of the Beast” Live in Mexico City’. The event featured a Dia de Muertos (Day of the Dead) themed dungeon, and introduced Day of the Dead Eddie, a new character ripped right from the album cover!