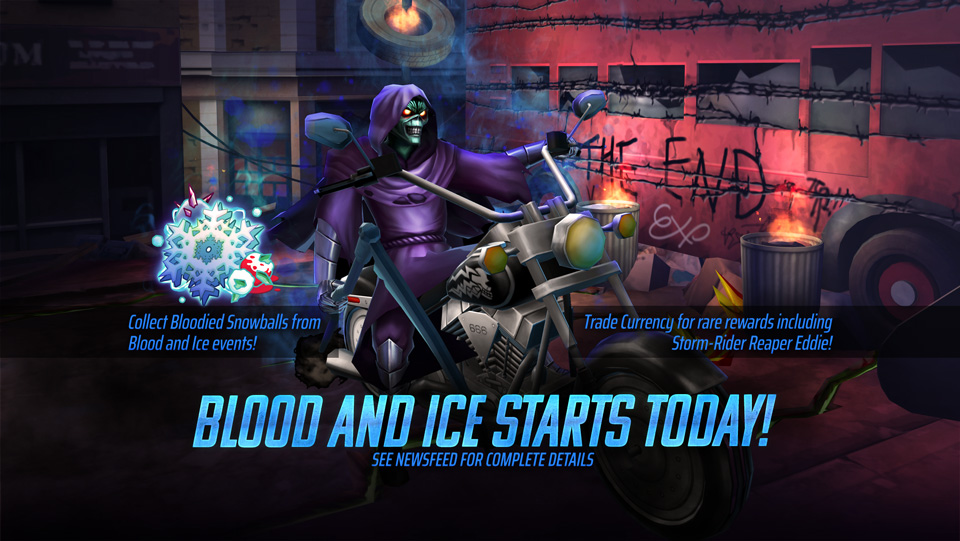 Blood and Ice is a series of events that will run through the month of December. These events will all grant the exact same currency type – Bloodied Snowballs!

There will be a total of 9 Blood and Ice associated events.

Events where you are earn Bloodied Snowballs Currency are as follows:

IMPORTANT: Event Challenges to help you earn more Bloodied Snowballs are coming but are delayed until later this week.

From out of the storm, the riders descend. Storm-Rider Reaper Eddie is the second rider revealed, a grim reminder of the fleetingness of life, and an existential threat to those who would live life apathetic to the wonders around them. This Eddie brings a combination of Grim Reaper Eddie’s damage-caster kit alongside the Storm-Rider’s shared abilities. You’ll want to bring specific characters alongside Storm-Rider Eddie to bolster his Heraldry. The larger your Heraldry, the more powerful he’ll become!

Active Ability: Kami No Ya
• Remove immunity from magic damage before dealing damage.
• Remove all ‘Chance to Take No Damage’ effects and all Shield Effects from the target before dealing damage.
• Deal a devastating hit of magic damage to a single target.
• Remove up to three Burn effects from each ally, and for each effect removed in this way, deal an additional hit of magic damage to the target.
• 60% Chance to remove Exalted, Might and Empowered from the target.
• Increase the Duration of all beneficial effects, including Golden effects, on self by 9.
• Inflict Unblockable Stun for 1 turn on the target
• Gain Perfect Immortality for 2 turns.
• If this attack kills the target, revive all allies up to MAX HP.

Currency can also be traded for Cosmic High Virtue – Patience Talismans, as well as various Souls, currencies and powerup materials.

Blood and Ice offers will be available in the Event store until 4PM PT ON January 9th 2022!

After this time, all Event store items will disappear and Bloodied Snowballs will be automatically converted into Precious Soul Fragments at a 10% rate.