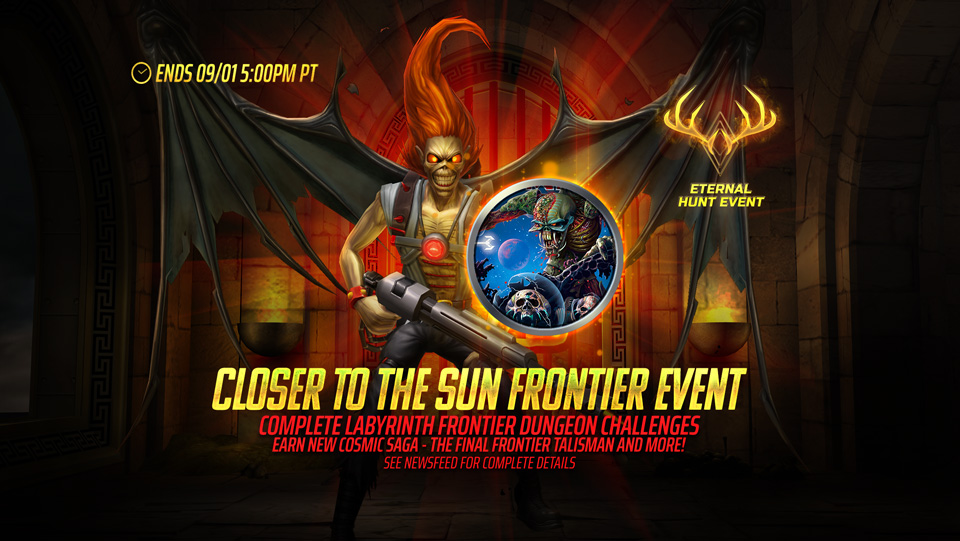 From now until September 1st at 5PM PT, complete Event Challenges in the Labyrinth Frontier Dungeon to earn a variety of rewards, including Resplendent Artifacts, Passionate Awakening Shards, Wild Artifacts and more!

For each other alive The Final Frontier album character with a Saga: The Final Frontier talisman, increase the duration of all negative effects, including Silver effects, of all enemies by 2 at the start of your turn.
• T1: Grant a random Golden effect for the duration of the battle to all allies, after an action, once per turn. If they have 6 or more Golden effects, grant them Innate Invincibility for 1 turn.
• T2: Inflict Perfect Stun, Perfect Freeze and Perfect Sleep for 1 turn on each enemy with 6 or more negative effects, including Silver effects, after an action, once per turn.
• T3: When you die for the first time, revive up to MAX HP and become Exalted, gaining the following until you die:
• Reduce all damage taken by 75% and reflect 300% of the damage you receive as true damage to all enemies.

You can learn more about this featured event in the Eternal Hunt event post!

Once it is unlocked, the Labyrinth Dungeon will be open for only 2 hours total. There are no limits on how many times the dungeon can be played within that time frame.

Troopers beware! This is a high challenge Dungeon with a Gunner Only Class Restriction, so be prepared!

All subsequent victories are guaranteed to provide XP Runes, as well as a chance of bonus rewards, including Labyrinth and Sacred Talismans on Normal, Celestial and Archer Talismans on Hard, Slothful and Justice Talismans on Madness.

**IMPORTANT: If you open another Labyrinth Frontier Key Soul while the corresponding Dungeon is already open you will refresh that dungeon’s countdown timer.