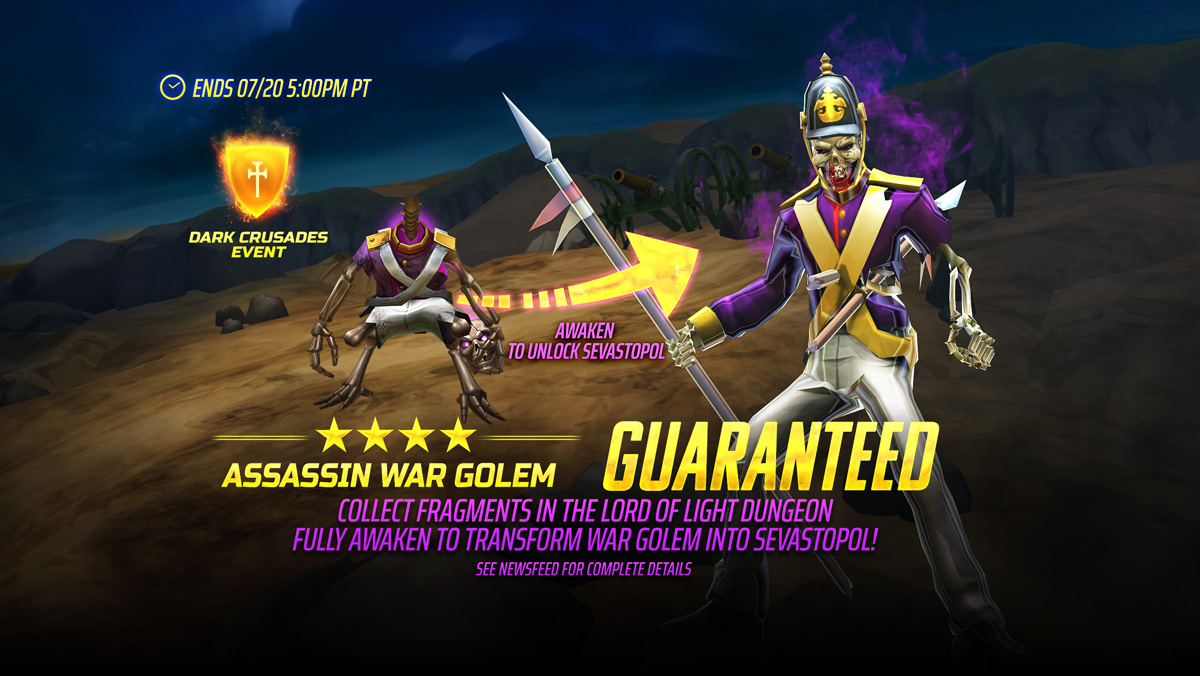 17 Jul Collect a 4⭐ Assassin War Golem GUARANTEED in the Lord of Light!

Conquer the Lord of Light to earn War Golem AND Lilith Soul Fragments!

Earn War Golem in the Lord of Light Dungeons from July 17-20th at 5pm PT!

Each Lord of Light battle has a chance of dropping 5, 10 or if you’re lucky, 50 fragments! Additionally, players who battle in Lord of Light Floors 11-15 will also be able to earn greater amounts of War Golem Fragments (10, 20 or 50) at an increased drop rate!

Collect 200 Fragments and you can redeem them in the Book of Souls’ Fragments screen for your very own 4⭐Assassin War Golem.

War Golem joins the cast as a new 4⭐Assassin in Legacy of the Beast. This single minded killer deals true damage and doles out devastating Negative Effects! The War Golem also happens to be the first fragment event character that is awakenable! His abilities will grow in power as he is awakened – Fully awaken your Assassin War Golem to transform him into Sevastopol!

Sevastopol takes enemies down with hybrid damage, and has a passive ability that will prevent enemies from healing for 5 turns while granting Perfect Heal Shields if any enemy is stunned and Perfect Immortality if they are frozen!

This Fragment event will also feature 4 Event Challenges which will reward a variety of items including XP Shards, Frontier Keys and Martyr Fragments.

Martyr Fragments are the event currency of our overarching Dark Crusades event that is running through July.

We’ve placed a free pack of 10 War Golem Fragments in the Store to get you started!

The Cosmic Crimean Militant Talisman provides an exclusive bonus when equipped to Bastion, Sevastopol, or Warlord. This Talisman increases stats in battle, reduces incoming damage, and gives the wearer a wide variety of powerful effects.

🎉Collect Lilith Soul Fragments! These special Fragments have a chance of dropping from all floors of the Lord of Light dungeons during this week’s War Golem event!