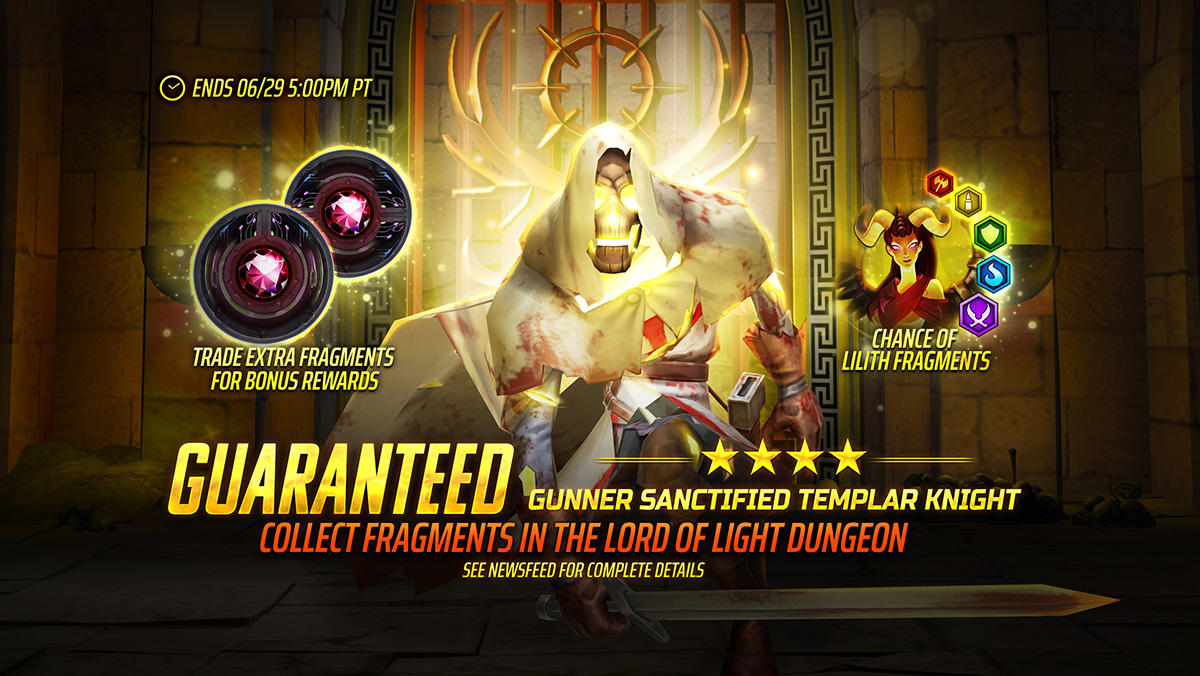 26 Jun Collect a 4⭐ Gunner Sanctified Templar Knight GUARANTEED in the Lord of Light!

Each Lord of Light battle has a chance of dropping 5, 10 or if you’re lucky, 50 fragments! Additionally, players who battle in Lord of Light Floors 11-15 will also be able to earn greater amounts of Sanctified Templar Knight Fragments (10, 20 or 50) at an increased drop rate!

Collect 200 Fragments and you can redeem them in the Book of Souls’ Fragments screen for your very own 4⭐Gunner Sanctified Templar Knight.

Sanctified Templar Knight joins the cast as a new 4⭐Gunner in Legacy of the Beast. This holy Knight Smites his opponents and heals his team! He calls upon divine power to outlast all in battle. His passive ability, Archon’s Refrain, gives an Innate Force Shield that prevents damage from a total of 12 incoming attacks at the start of battle and whenever you revive or an enemy is killed. You will also gain 1 Power, increasing by 1 each turn up to a maximum of 12, at the start of your turn.

This Fragment event will also feature 4 Event Challenges which will reward a variety of items including XP Shards, Frontier Keys and Gold.

We’ve placed a free pack of 10 Sanctified Templar Knight Fragments in the Store to get you started!

The Cosmic Lilith Talisman provides an exclusive bonus when equipped to a Lilith (any class EXCEPT DARK LILITH). This Talisman increases stats in battle, and reduces incoming damage. It will also grant immunity to Doom and Perfect Death to all allies, and will inflict Passive Disable and Physical Burns on a random enemy for 2 turns at the start of your turn and after every action. These talismans also ensure all allies attacks will land with perfect hits.

🎉Collect Lilith Soul Fragments! These special Fragments have a chance of dropping from all floors of the Lord of Light dungeons during this week’s Templar Knight event!