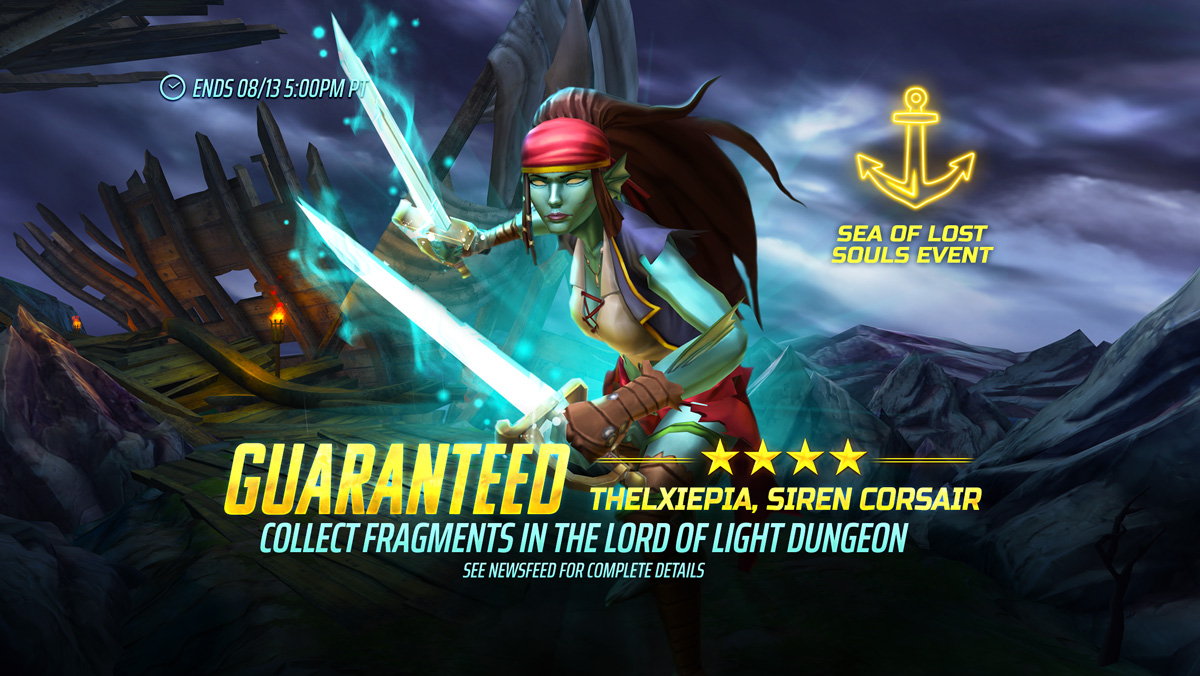 10 Aug Collect a 4⭐ Warrior Siren GUARANTEED in the Lord of Light!

Conquer the Lord of Light to earn Siren Corsair AND Lilith Soul Fragments!

Earn Siren Corsair Fragments in the Lord of Light Dungeons from August 10-13th at 5pm PT!

Each Lord of Light battle has a chance of dropping 5, 10 or if you’re lucky, 50 fragments! Additionally, players who battle in Lord of Light Floors 11-15 will also be able to earn greater amounts of Siren Corsair Fragments (10, 20 or 50) at an increased drop rate!

Collect 200 Fragments and you can redeem them in the Book of Souls’ Fragments screen for your very own 4⭐Warrior Thelxiepia, Siren Corsair.

The Siren joins the cast as a new 4⭐Warrior in Legacy of the Beast. This wayward spirit sails the seven seas looking for adventure and new conquests! She passively applies effects to increase her efficiency in battle and lures her opponents to their doom by Taunting them and inflicting negative effects like Bleed, Lower Power Generation and Defense Down.

This Fragment event will also feature 4 Event Challenges which will reward a variety of items including XP Shards, Frontier Keys and Gold.

We’ve placed a free pack of 10 Siren Corsair Fragments in the Store to get you started!

Extra Siren Fragments can score you Purple Cosmic Talismans with the Limbo set effect, and the rare Cosmic Musashi Talismans!

🎉Collect Lilith Soul Fragments! These special Fragments have a chance of dropping from all floors of the Lord of Light dungeons during this week’s Siren event!