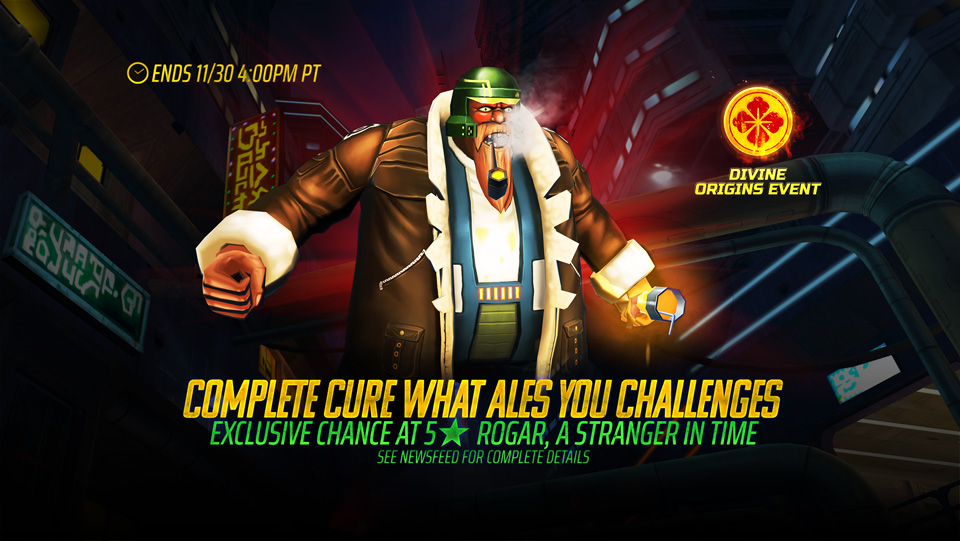 24 Nov Cure What Ales You – Exclusive Chance at 5★ Rogar, A Stranger in Time

Out in the Strange Land region of space, a wide arrange of species and opportunities can be found. Rogar is a Cosmogian, a race of large and powerful aliens from a distant part of the cosmos. His physiology allows him to consume all manner of foods and liquids that would turn a human’s guts to black goop. Rogar brings his skills as a bruiser to your team, shrugging off Permanent Stat Decreases and getting more powerful as the battle progresses. Whatever Rogar is drinking, it usually doubles as a weapon, causing severe random negative effects on the enemy team.

For those who remember, Rogar placed 2nd in community votes during the Forge a Hero campaign we ran back in the Spring. We knew he was popular based on the sheer amount of votes he received and now you can battle for a chance to collect him in the Cure What Ales You event!

Intergalactic Credits can be traded in store for a variety of items including Bruiser Souls, Rogar, A Stranger in Time himself and new Cosmic Purity Talismans!

If another Talisman effect or Character Passive is disabled by this Talisman, gain the following:

IMPORTANT: Cure What Ales You is the FINAL Divine Origins associated event. Once this event ends you will no longer be able to collect Heavenly Currency! You MUST spend your currency on Divine Origin items by December 5th at 4pm PT.