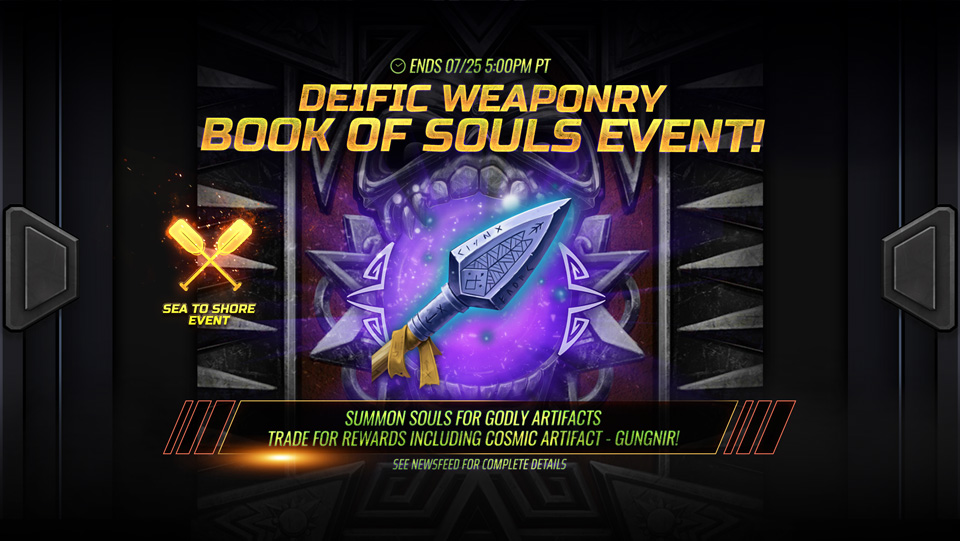 Posted at 17:00h in Uncategorized by Anna Smith

From now until July 25th at 5PM PDT, every non-Heroic and non-Talisman Rare, Epic, Legendary and Mythic Soul you open in the Book of Souls, regardless of where you earned it (Skull Quests, bought from Store, earned from Sacrifice, etc) will give you a guaranteed bonus of Godly Artifacts.

Godly Artifacts can be traded in for Cosmic Viking Talismans, various Awakening Shards and the new Cosmic Artifact – Gungnir!

Wield the power of a God with this new Cosmic Artifact. When equipped this artifact bestows the Aegis of Valhalla. This ability does the following:

Do the following if you are Odin, Bushida Ryō, Viking Eddie, Viking Invader Eddie, Freya or Thor Eddie:
• Permanently increase All Stats of self by 150%.
• Gain ‘reduce all damage by 50%’ for the duration of the battle.
• Remove all Innate and Unblockable negative effects from all allies.
• Grant immunity from all Innate and Unblockable negative effects and all damage for 2 turns to all allies.
• Anoint self and a random ally, permanently increasing All Stats by 25%, until they die.
• Grant True Shield, Physical Shield, Magical Shield and Perfect Titan Shield for the duration of the battle to all Anointed allies.
• Heal all allies up to MAX HP.

The effects of Aegis Of Valhalla can only be used once on your team per battle.

**Note – Heroic Souls and Talisman Souls will NOT give Godly Artifacts during this event: 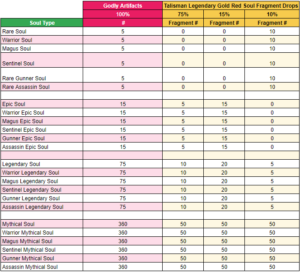