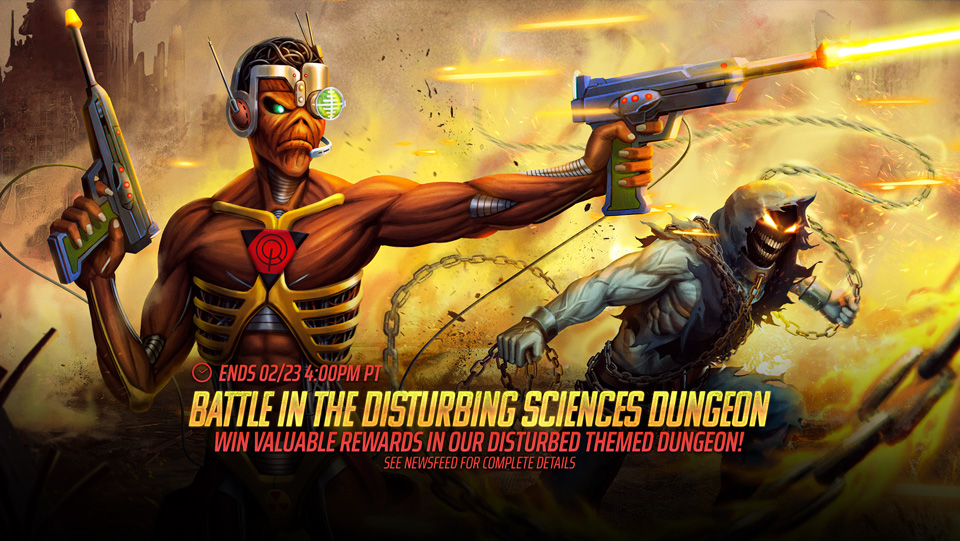 We’re teaming up with American rock legends Disturbed for another incredible in-game collaboration.

Disturbed’s mysterious mascot is making his Legacy of the Beast debut. The Guy is the literal spirit of vengeance and a formidable warrior who travels the universe on a mission to topple tyrants!

You can earn The Guy for free just by logging in! Log in any 7 days between February 16th and March 18th to earn awesome rewards including The Guy himself on the 7th day!

You can get a look at The Guy in action during the Disturbing Sciences dungeon event. Available until February 23rd at 4PM PT this special dungeon is an ode to both bands’ lore taking its broad themes from the cover of Iron Maiden’s “Somewhere in Time” album and Disturbed: Dark Messiah, a five-part comic book series where The Guy makes his comic book debut.

Disturbing Sciences features a Disturbed themed script, and 4 difficulty settings with epic rewards. Cyborg Eddie leads the charge as he and The Guy bring the metal to Brian Kek, a power hungry industrialist who will stop at nothing to push technology to its extremes. Can they stop Kek’s master plan?

The first time you complete Normal you will earn set rewards including:

Think Tanks
Dungeon Fragments
A chance of up to 2 bonus rewards, including: [B]Oracle Talismans (Arcane Subtype)[/B].

Think Tanks can be traded in store for Corporate Souls in bundles of 1, 3 and 10, Cosmic Aesir Talismans and corporate overlord- Brian Kek!

Buried Treasures is the event currency of our From the Grave event running until March 1.