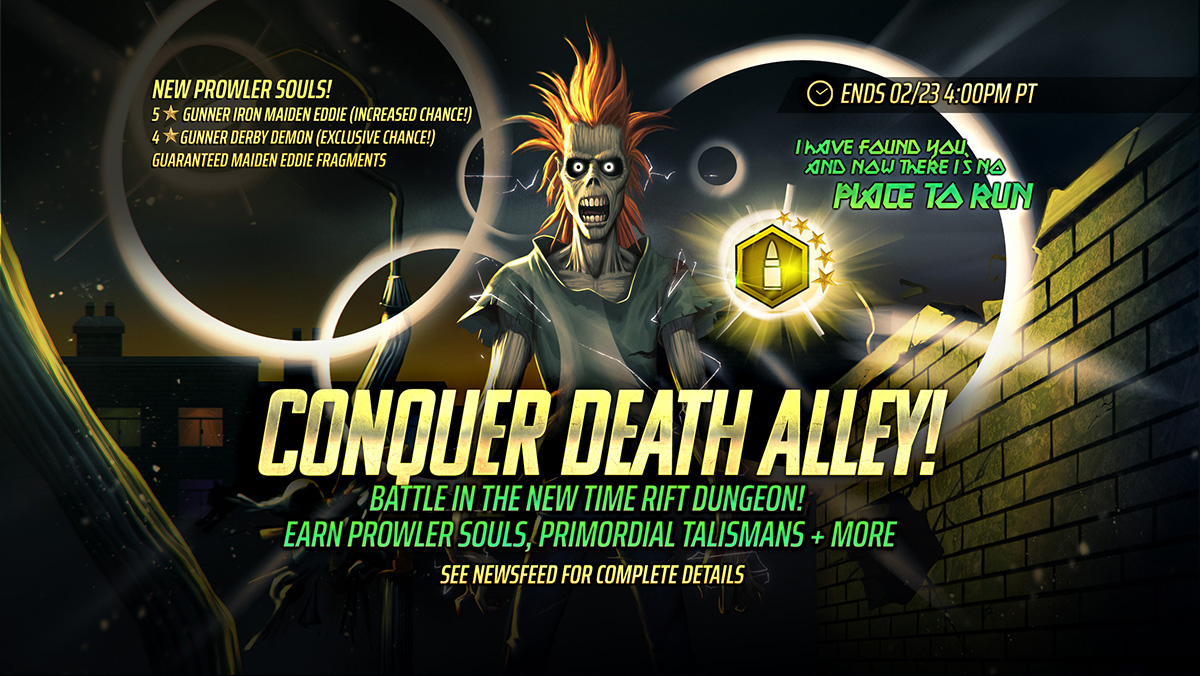 Can’t you believe your eyes?

Iron Maiden Eddie is making his Legacy of the Beast debut in a limited-time Dungeon! Collect Prowler Souls for an increased chance to pull this 5⭐Gunner!

From now until February 23rd at 4PM PT, battle in a limited time Dungeon for Prowler Soul Fragments and Primordial Talismans!

The Prowler Soul is a limited time event soul which guarantees a 3★ to 5★ character of any class, with an increased chance of Iron Maiden Eddie, and the Gunner Convict, and an exclusive chance of getting the Gunner Derby Demon and Assassin Prison Cook!

Prowler Souls can be earned in one of three ways:

Iron Maiden Eddie (5* Gunner): Iron Maiden Eddie uses vicious psychic abilities to remove beneficial effects from the enemies and apply powerful negative effects if he is suffering from negative effects himself! He is a multi-target damager who is incredible on Arena Offense, particularly when he is facing off against enemies that rely immunity and damage invulnerability effects!

Convict (3* Gunner): A single-target damager who can Disable Passive and Block Beneficial effects. Can blind enemy targets for 2 turns.

Derby Demon (4* Gunner): A damage dealing demon who can disable the enemy’s passive ability, remove immunity, and inflict Exhaust on enemies if Trap is not present at the start of her turn.

Prison Cook (3* Assassin): A single-target damager who can Cleanse and Heal all allies suffering from Blind or Taunt. Heals all allies based on the number of negative effects present and Cleanse the existing effects including silver debuffs

The Gunner Derby Demon and Assassin Prison Cook are ONLY available in the Prowler Soul, and after this event, they will only be featured occasionally in Heroic Soul Rotations. If you miss your chance to recruit them now, it may be a very long time until you get another chance!