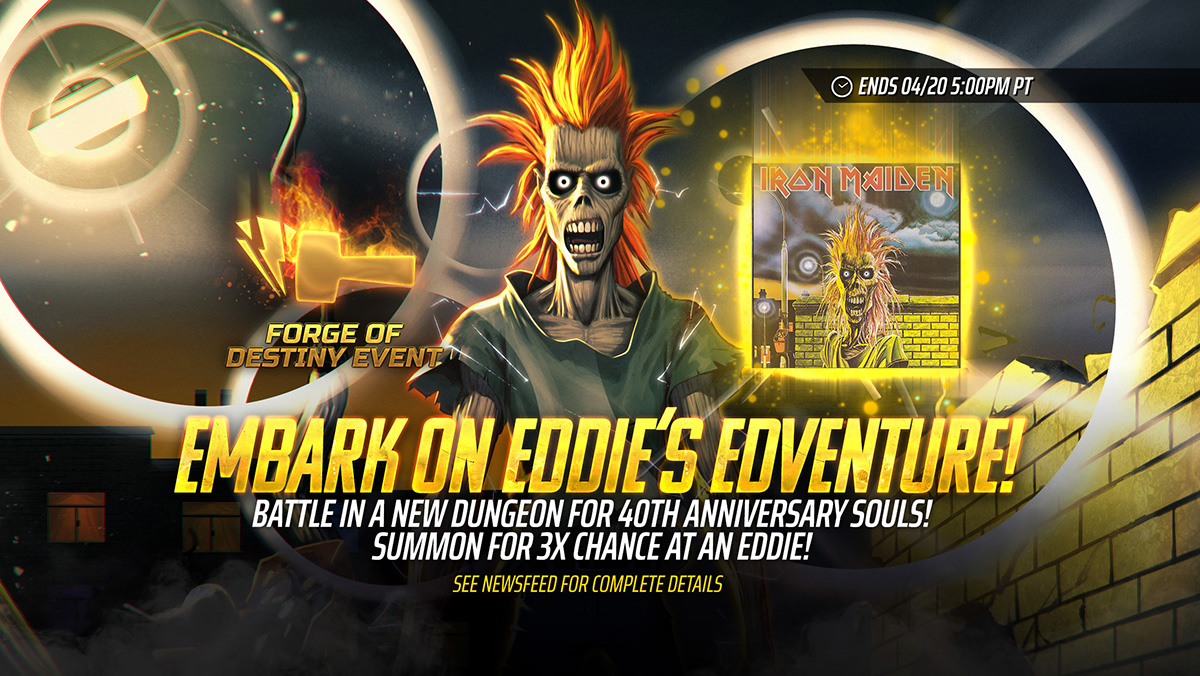 From now until April 20, 5 PM PT, battle in a dungeon that is an ode to the Cart & Horses, the birthplace of Iron Maiden! This dungeon comes with 4 difficulty settings and is packed with awesome rewards!

The first time you complete Normal, Hard or Madness, you will earn set rewards including 40th Anniversary Souls and Purge Talismans, and your first Insanity run will grant T3 Cosmic Evo Runes and Talisman Epic Soul Fragments. All subsequent victories are guaranteed to provide 40th Anniversary Soul Fragments, and Dungeon Fragments, as well as a chance of up to 2 bonus rewards, including Brave Talismans.

40th Anniversary Souls can be earned in three ways:

The 40th Anniversary Soul is a limited time event soul which guarantees a 3★ to 5★ character of any class. This soul also has a 3x chance of summoning an Eddie!

You can trade these fragments for a variety of Souls and for character specific Cosmic Pharaoh Dog Talismans! These talismans provide exclusive bonuses to any Pharaoh Dog or Pharaoh Dog King.

When equipped these Talismans increase all stats in battle and reduce incoming damage. They also Transform silver effects into a random beneficial effect, and grant Immunity to Crave and all effects that cause damage to self when healing. These Talismans will also give 1 Power and 20% Fury to your team for each ally that is currently alive and revive your Pharaoh Dog with 30% HP and Perfect Heal Shield for 1 turn upon death.