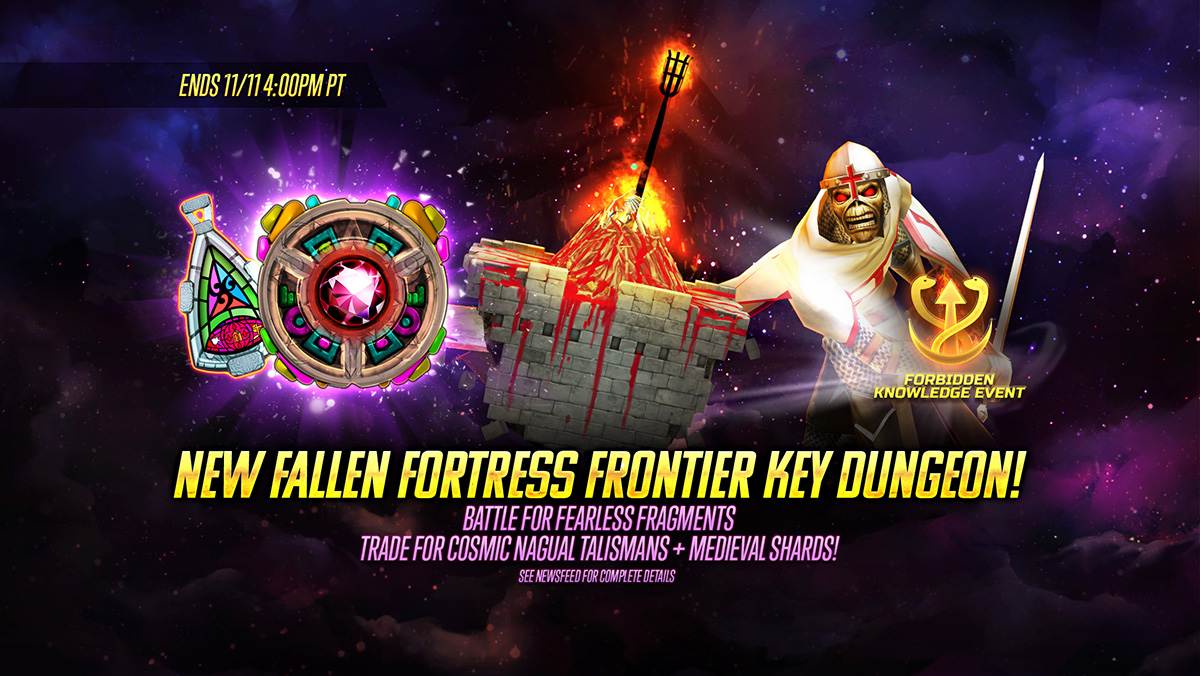 To celebrate its release, we’re hosting a new event where you can work towards Medieval Awakening Material and rare Talismans!

Fearless Soul Fragments are used in store to purchase rare items including a character specific Cosmic Talisman for Day of the Dead themed characters, as well as the return of the Cosmic Trooper Eddie Talisman! These rare items are available in the store only during this event, and it may be a long time before you see them again.

The Cosmic Nagual Talisman provides an exclusive bonus when equipped to The Nagual, The Witch Doctor, Shaman Eddie and the following upcoming characters: Day of the Dead Eddie, the Spirit Jaguar. This Talisman increases the wearers stats in battle, and reduces incoming damage. It will also give the wearer:

50% Chance to Transform All Beneficial Effects, including Golden effects, on each enemy into a Stun, Freeze or Sleep effect, including Silver and Unblockable effects, and up to 3 Marks for 1 turn at the start of battle and at the start of your turn if you are not at full HP. Gain Immunity and Endure for 2 turns when you take damage. Once per battle, Revive with 10% HP and gain Immunity to Damage for 2 turns.

You can also trade in Fearless Fragments to pick up the unique Awakening material for Dark Ages themed characters – the Medieval Awakening Shard!

We also have a few other items available in the Store to help you prevail in battle!

Once it is unlocked, the Fallen Fortress Dungeon will be open for 2 hours total and can be played an unlimited amount of times during that period. This dungeon also comes with a restriction making it so only 4★ Magus and Assassin class characters can be used to play!

The first time you complete this dungeon, you will receive set rewards including a Legendary Soul, Talisman Soul Fragments and more. All subsequent victories are guaranteed to provide Evo Shards, as well as a chance of bonus rewards, including Babylon and Aim Talismans.

You can learn more about this character by checking the Compendium in the Book of Souls screen, and see full Achievement details in-game!

**IMPORTANT: If you purchase another Fallen Fortress Dungeon Frontier Key while the corresponding Dungeon is already open you will refresh that dungeon’s countdown timer.