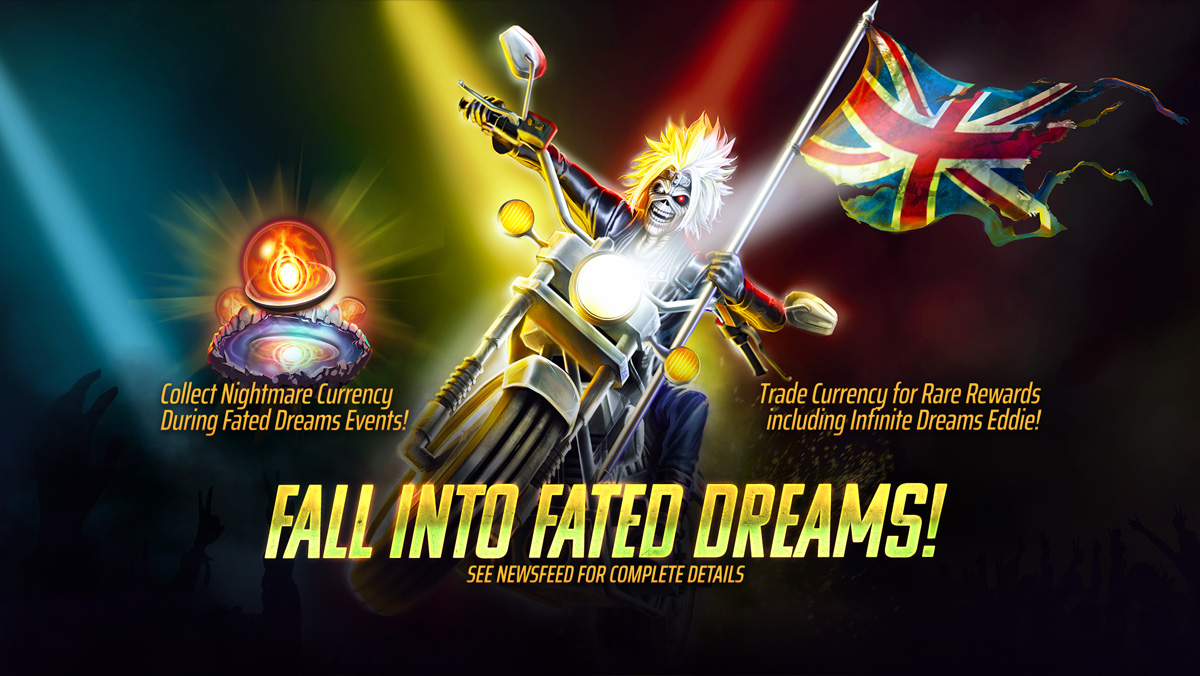 Fated Dreams is a series of events that will run through the month of April. These events will all grant the exact same currency type – Nightmare Currency!

There will be a total of 7 Fated Dreams associated events.

Events where you are earn Nightmare Currency are as follows:

BONUS: For the month of April, Nightmare Currency will also be earnable through infinitely repeatable event challenges involving the Gangland, Powerslave and Final Journey Dungeons!

Spend your Nightmare Currency in the Event store tab to get rare rewards including Infinite Dreams Eddie, Cosmic Biker Talismans and other exciting rewards!

Full throttle carnage! Infinite Dreams Eddie is a 5★ Assassin who deals devastating hits of True Damage to all enemies, with a high chance to apply critical strikes!  His fury attack, Infinite Loop, Permanently Increases his Max HP, Inflicts True Burns and will apply ‘Soul Shackle’ to a random enemy. While your Soul Shackle is active, you will drain their HP and cannot take more than 5% of MAX HP as damage from any single attack. Should you use your Fury while Soul Shackle is active on an enemy, you will have a 50% chance to permanently kill that character.

The Cosmic Biker Talisman provides an exclusive bonus when equipped to Charlotte, Wrathchild and Infinite Dreams Eddie. This Talisman increases stats in battle, and reduces incoming damage. Its wearers will also gain the following effects:

50% Chance to take no damage, remove all Immunity and Vanish effects including Golden effects and inflict Exhaust on attacking enemies for 2 turns whenever you are attacked. Remove Stun, Sleep and Freeze including Silver and Unblockable effects from self at the start of your turn. Permanently increase ATK and Magic by +50% on self each time an ally gains an extra turn.

Currency can also be traded for Cosmic Fools Talismans, as well as various Souls, currencies and powerup materials.

Fated Dreams offers will be available in the Event store until 5PM PT ON May 3rd 2021!

After this time, all Event store items will disappear and Nightmare Currency will be automatically converted into Precious Soul Fragments at a 10% rate.