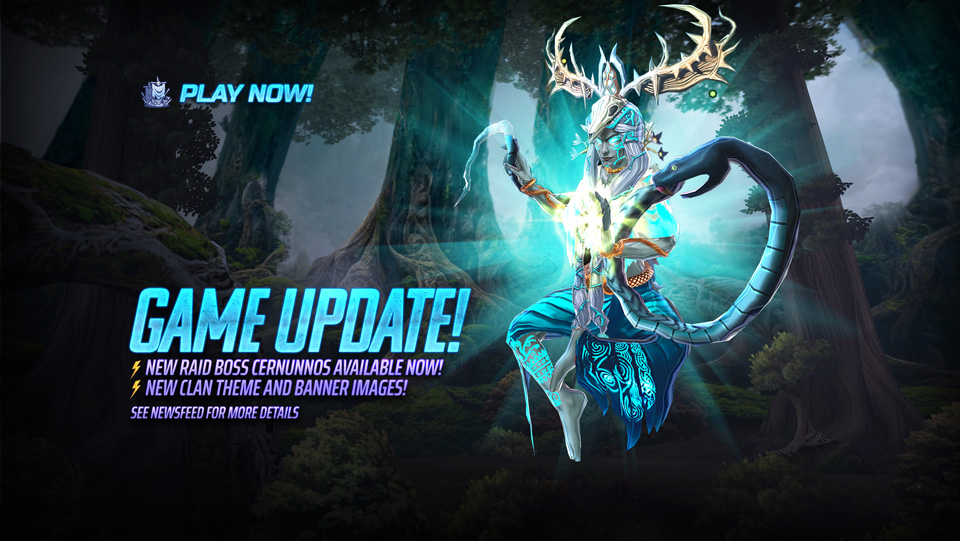 Fourth Raid Boss Released!
The Celtic God Cernunnos is the toughest raid boss yet. Cernunnos manifests into Legacy of the Beast as a Sentinel class God, protecting their allies from harm and forcing foes to crack their Gaea’s Ward protection before being able to deal damage! With Gaea’s Might, Cernunnos smashes enemies and, with enough Power, will quickly become an unstoppable force of nature.

Head to Clans and take on Cernunnos today!

As discussed in our State of the Nation, we have made some minor changes to the Raid Boss loot tables. Specifically, we have moved Clan character fragments that were previously earnable in Odin and Baphomet to Amaterasu and Cernunnos.

In addition to this, T1-T2 and T2-T3 Bespoke Cosmic Talisman upgrade materials (Folded Sail, Raven Feather, Angel Wing and War Drums) have been added as Top Prize rewards for Amaterasu and Cernunnos.

The movement of character soul fragments and the addition of these new prizes are the only loot table changes present in this release. No other rewards have been touched.

How to get a Top Prize:
Top Prize refers to the upper most potential rewards. Players are able to see possible Top Prizes displayed for each Boss on the Raid Boss battle selection screen. While these are potential prizes, not every battle won will give you the opportunity to earn a top prize. To get a top prize you must achieve SS or SSS Grade on Floor X or SSS Grade on Floor IX.

We have created tables below to showcase the possible Top Prizes available for each Raid Boss. 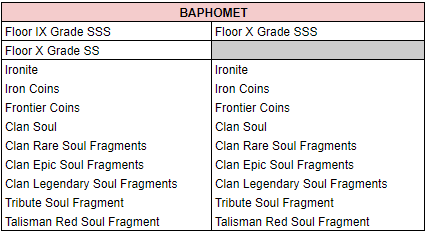 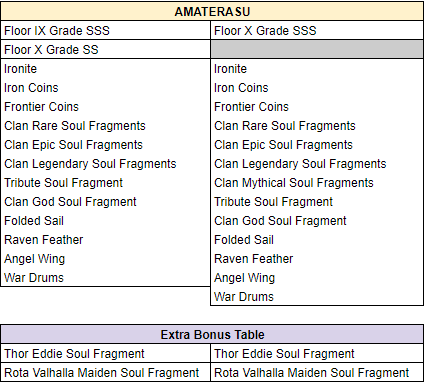 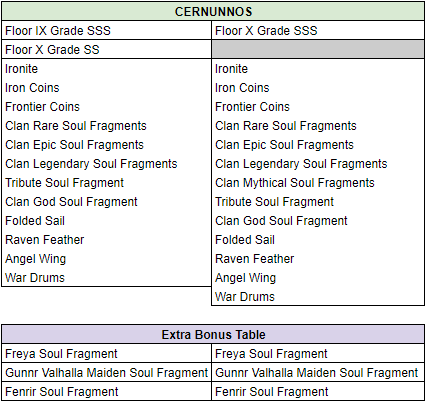 Notes:
*When you get a Top Prize you are guaranteed to win some of the prizes listed in the Top Prize table
**When players achieve SSS on Floor X both reward tables for the specific boss they battled are referenced when prizes are allotted
***Extra bonus tables are potential bonus rewards for getting a Top Prize. It is not guaranteed that you will receive one of these bonus table rewards.

Players will be able to earn a larger amount of Raid Points by fighting our newest Raid Boss, Cernunnos.

In addition to this, the lower 6 ranks of Raid Boss (F to A Grades) will be worth more points overall! With this boosting of base points, early game players who battle in lower levels will see their contributions matter even more to the Clan total.

In honour of the release of Cernunnos, players will now see their Clan hub transformed into a mystical forest. We’ve also added 3 new profile images for your Clan to choose from – Senjutsu Eddie, Amaterasu and Cernunnos!

Updated Frontier Dungeon
The Labyrinth Frontier dungeon now has a Madness Difficulty setting. We’ll have an event focused on this dungeon starting in late August!

New Awakenable Characters
Wicker Man Eddie and the Clairvoyant are now awakenable! You can start powering up these characters to new levels as of this update.