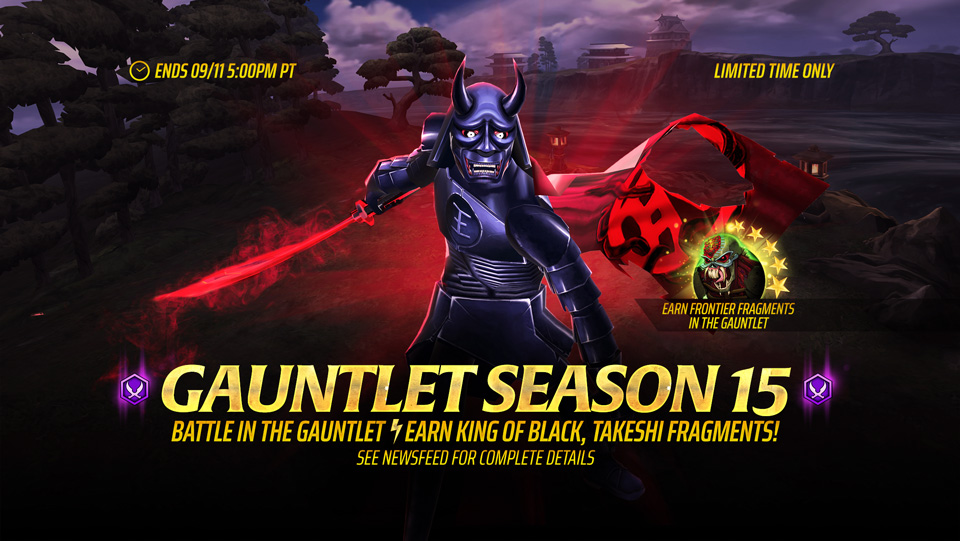 Earn King of Black, Takeshi Soul Fragments and other Rare Rewards in the Gauntlet.

Our Fifteenth Gauntlet season starts now and will run until September 11th at 5:00 pm PT. Battle through 11 Grades of Gauntlet, each presenting unique challenges and rewards to earn a place on our Ranked Leaderboard. The Ranked Rewards for Season 15 will feature King of Black, Takeshi Fragments, in addition to other rewards.

You will have 10 weeks (until the end of Season 15) to earn enough King of Black, Takeshi Fragments from the Gauntlet to summon him, after that he will be much more difficult to obtain, as he won’t be featured in any other soul.

On the border of a god’s dreams lies a land split down the middle by the forces of creation and annihilation. Buried in this dreamscape: a prophecy. The armies of each side in equilibrium- enter King of Black, Takeshi in Legacy of the Beast!

This sovereign, a herald of darkness and powers beyond comprehension, marches forward as he leads his forces against his fated foe. Players can expect this Gauntlet character to lead an Empowered team to victory- casting down the Anointed and Exalted, and perpetually adding to the duration of your foe’s negative effects!