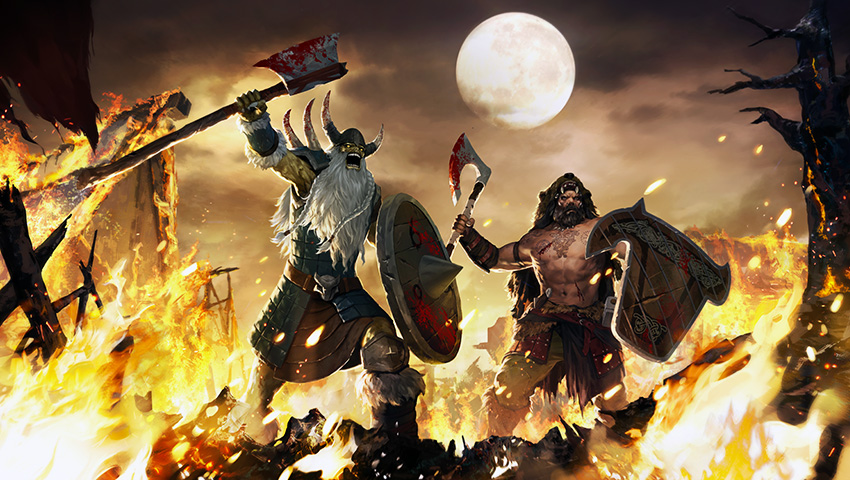 Posted at 17:07h in Press by Cruz Rodriguez

Titled the “Viking Invasion”, the month-long event takes its broad themes from IRON MAIDEN’s song “Invaders”, from 1982’s “The Number Of The Beast” album. Taking a page out of its own (comic) book, Legacy Of The Beast created a new character and storyline borrowing from AMON AMARTH’s latest album, “The Berserker”.

After a spate of murderous attacks on his village, a lone Beserker vows revenge on the culprits who slaughtered his family. No stranger to battle, retribution or revenge, Eddie, IRON MAIDEN’s infamous mascot, leads not only the Beserker but also Norse goddess Freya into battle against unrelenting waves of enemies to seek vengeance for the Berserker’s fallen kin. Are these random attacks, or is something more sinister afoot? Find out when you meet The Berserker in the Viking Invasion Dungeon launching April 13, 2021 at 5 p.m. PT in Iron Maiden: Legacy Of The Beast mobile game.

“‘Legacy Of The Beast’ was built on a foundation of IRON MAIDEN songs, art and history, but has also always been about introducing and developing creative ideas that extended beyond MAIDEN,” band manager Rod Smallwood comments, “and, just as we’ve always invited bands out to tour with us, we are delighted to invite some friends to become part of our game and to provide another dimension to the fun, dexterity and excitement of it.”

In Iron Maiden: Legacy Of The Beast, metal and RPG gaming fans take on the role of the band’s iconic mascot, Eddie, who travels through time, across a spectacularly diverse array of worlds in captivating 3D environments. Eddie appears in many forms, each a part of IRON MAIDEN’s rich history, and each with a set of special powers and abilities.

AMON AMARTH’s lead vocalist and Viking-in-chief Johan Hegg explains: “To have our own character in the Iron Maiden: Legacy Of The Beast game is just insanely cool! And such an honor. We hope everyone will enjoy our humble contribution to this awesome game!”

Players can earn the Berserker character for free from April 13 to May 12, 2021.