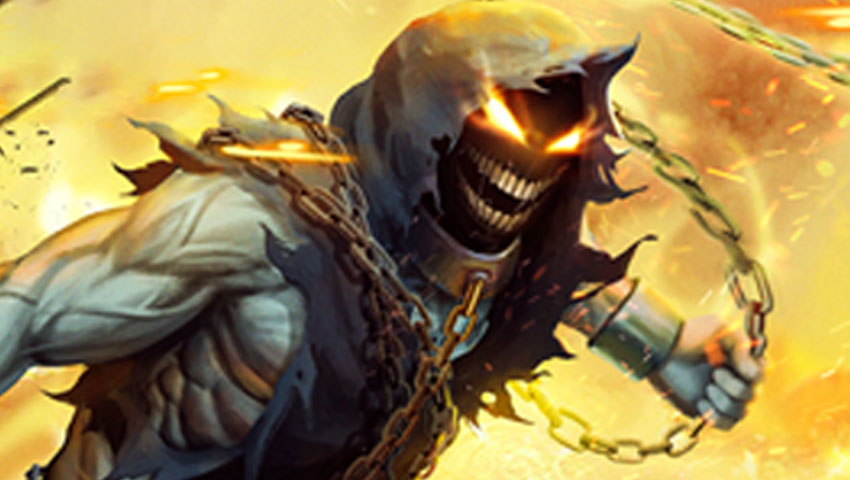 Posted at 13:39h in Press by Cruz Rodriguez

The free-to-play mobile game from metal legends Iron Maiden continues to bridge the gaming universe with heavy culture with yet another joint effort that ropes in one of hard rock’s biggest names.

In recent months, the game has launched limited experiences with the likes of Amon Amarth, Lacuna Coil and Ghost that saw each band’s unique imagery integrated with the gaming universe of Iron Maiden’s iconic Eddie. The latest iteration will see the cloaked mascot of Disturbed in The Guy, team with Cyborg Eddie for a brand new storyline built into the game.

The limited time, in-game event called Disturbing Sciences features the tandem immersed in a world inspired by a creative cross-section consisting of the cover of the 1986 Iron Maiden album Somewhere in Time and Disturbed’s Dark Messiah – the band’s five-part comic book series which features the comic book debut of anti-hero, The Guy.

The latest chapter of the Legacy of the Beast gaming world depicts Cyborg Eddie and The Guy arriving at the Polvo Valley after traveling through time and space. The small town turned into a sterilized industrial outpost, becomes a battleground where Eddie and The Guy confront the region’s corporate overlord Brian Kek, ending his reign of tyranny as the villainous CEO stationed at Kek Tower.

The unique collaboration was met with enthusiasm from Disturbed frontman David Draiman, “My self and the guys from Disturbed are humbled to be included in the Legacy of the Beast game. We feel that The Guy is a worthy addition to the saga and we’re very happy to be a part of it … when we first saw the first concept pieces of how he would be integrated into the game it was thrilling for all of us, it’s still kind of surreal!” David continues, “I love that our dark messiah storyline from the Disturbed comic book series, {from the graphic novel} is being integrated into the video game series, I think they go hand and hand with one another. I love more people having the opportunity to play as The Guy … and battle the forces out there that deserve to have their asses handed to them.”

Navigator Games CEO, Will Moore added, “We had such a positive response to our in-game band collaborations last year, we wanted to keep the momentum going into 2022. We have several surprises planned this year, and what better way to kick things off, than by bringing Disturbed’s iconic mascot to life. It was such a natural fit to include ‘The Guy’ in Eddie’s world and have them battle the forces of evil together.”

The Guy makes his debut via Iron Maiden’s: Legacy of the Beast game in the Disturbing Sciences dungeon event starting at 4pm PT on February 16th.

Players can unlock The Guy character for FREE starting February 16th by logging in a total of 7 days to receive The Guy on the final day. The in-game experience ends after a full week on February 23rd, 4 PM PT.