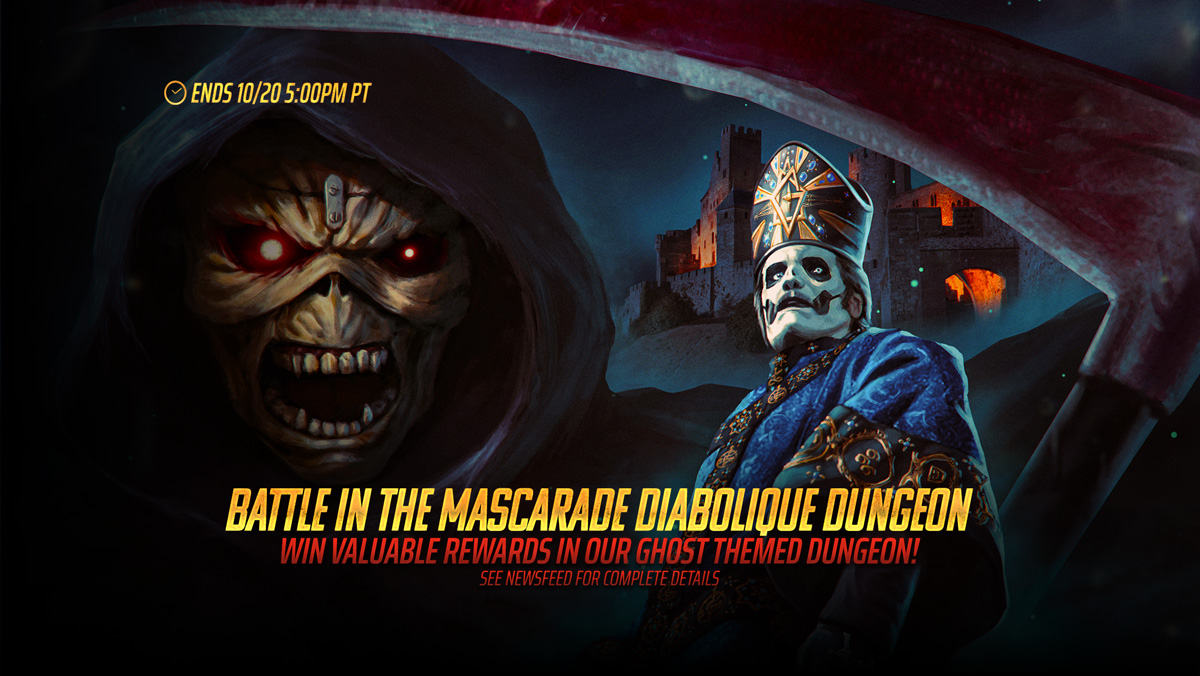 You’re invited to the Mascarade Diabolique! We’re teaming up with Swedish metal band Ghost for another incredible in-game collaboration.

Papa Emeritus IV rises to power! This former Cardinal is a spell caster who pressures the enemy with his powerful magic and specialized synergy. His passive ability, Life Eternal, anoints his allies, blessing them with increased stats and bestowing a variety of powerful effects.

Get full character details in the Compendium.

You can earn the Papa Emeritus VI for free just by logging in! Log in any 7 days between October 13th and November 12th to earn awesome rewards including Papa Emeritus VI himself on the 7th day!

You can get a look at Papa Emeritus VI in action during the Mascarade Diabolique dungeon event. Available until October 20th 5PM PT this special dungeon draws upon themes from the cover of Iron Maiden’s 2003 album ”Dance of Death” and the video to Ghost’s 2018 song, ‘Dance Macabre,’ an ode to each band’s lore! Mascarade Diabolique features a Ghost themed script, 4 difficulty settings and is packed with valuable rewards!

A demonic power has arisen…and it’s throwing a party! Grim Reaper Eddie leads the Dancer of Death and Papa Emeritus into battle at a deadly mascarade! All 3 characters will be permanent companions anytime you battle in this area, leaving you 1 character slot to bring the ally of your choice.

The first time you complete Normal you will earn set rewards including:

Ritual Reagents Currency can be traded in store for Moonlight Souls in bundles of 1, 3 and 10, and the wicked imposter, Cardinal Immortus!