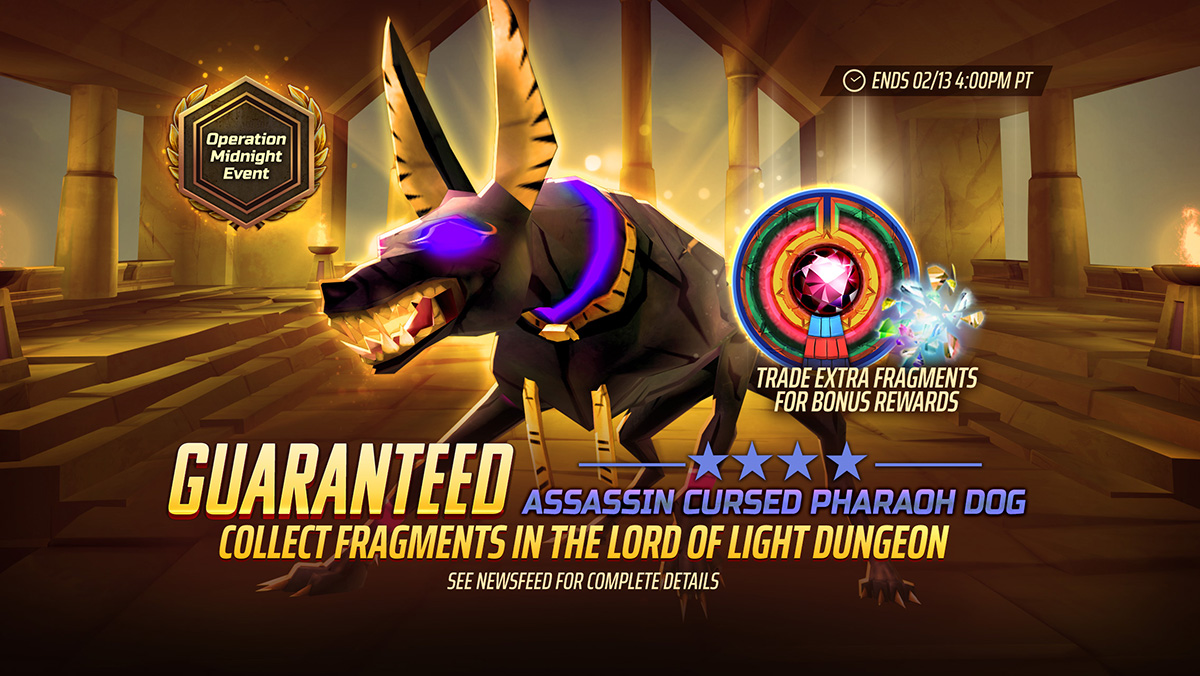 Conquer the Lord of Light to earn Pharaoh Dog AND Lilith Soul Fragments!

Earn a Cursed Pharaoh Dog in the Lord of Light Dungeons from February 10th to February 13th at 4pm PT!

Each Lord of Light battle has a chance of dropping 5, 10 or if you’re lucky, 50 fragments! Additionally, players who battle in Lord of Light Floors 11-15 will also be able to earn greater amounts of Pharaoh Dog Fragments (10, 20 or 50) at an increased drop rate!

Collect 200 Fragments and you can redeem them in the Book of Souls’ Fragments screen for your very own 4⭐Assassin Cursed Pharaoh Dog.

The Cursed Pharaoh Dog joins the cast as a new 4⭐Assassin in Legacy of the Beast. The Cursed Pharaoh Dog specializes in healing your team and amping up their battle potential. This ally passively increases your allies healing capabilities by 100% and grants Charge and Golden Perfect Hit to any ally suffering from Blind or Taunt.

Rise up to fight again! The Cursed Pharaoh Dog’s power ability, Deliverance, will revive all fallen allies and give them Perfect Heal Shield and Golden Trap!

Explosive Fragments are the event currency of our overarching Operation Midnight event that is running through February.

We’ve placed a free pack of 10 Pharaoh Dog Fragments in the Store to get you started!

When equipped these Talismans increase all stats in battle and reduce incoming damage. They also Transform silver effects into a random beneficial effect, and grant Immunity to Crave and all effects that cause damage to self when healing.

These Talismans will also give 1 Power and 20% Fury to your team for each ally that is currently alive and revive your Pharaoh Dog with 30% HP and Perfect Heal Shield for 1 turn upon death.

🎉Collect Lilith Soul Fragments! These special Fragments have a chance of dropping from all floors of the Lord of Light dungeons during this week’s Tiny Tim event!