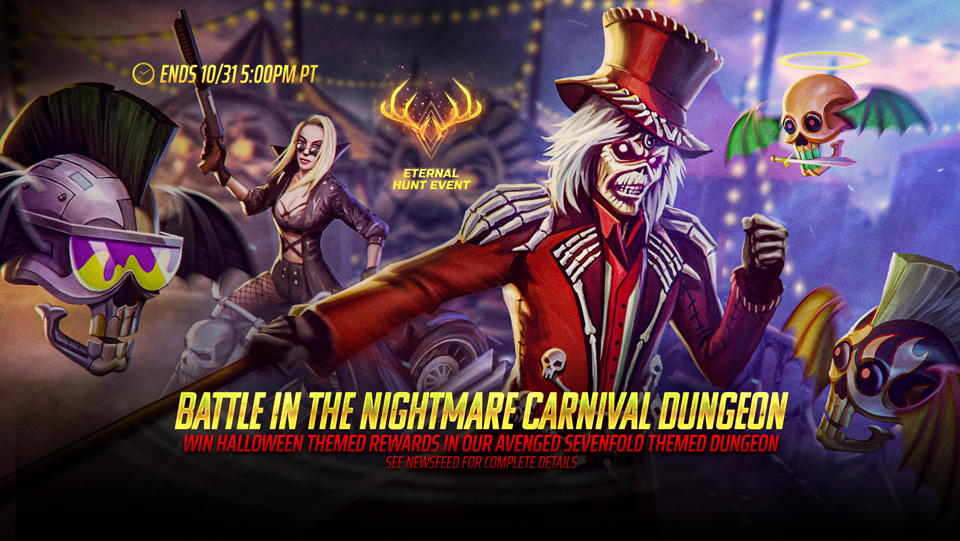 We’re teaming up with Avenged Sevenfold’s Deathbats Club for an awesome in-game collaboration.

Introducing the Deathbats! These undead carnies and scoundrels inflict negative effects on enemies, working together to crush anyone who stands in their way – no matter how many lives it takes. The design for these characters were inspired by Avenged Sevenfold’s iconic logo and NFT project.

The Deathbats rule the Nightmare Carnival. Available until October 31st this dungeon features an Avenged Sevenfold themed script, and 4 difficulty settings with epic rewards. The Nightmare Carnival was set to open soon and now a mysterious figure and his host of deadly and mischievous skulls known as the Deathbats have taken over the fairgrounds! It’s up to Ringmaster Eddie to clear the way and save the Carnival.

Earlier this year, the Deathbats Club held an exclusive contest on the official Deathbats Club Discord channel for members of the DBC to have their bat featured in Legacy of the Beast! 25 semi-finalist were chosen but only 3 were turned into official playable characters in the game. Finally, keep your eyes peeled as you battle through the dungeon. Other Deathbat semi-finalist designs can be seen throughout the Nightmare Carnival!

You’ll be able to earn the 3 winning Deathbats just by playing the event:

Halloween Soul Fragments can either be claimed as Souls or traded in-store for rewards such as Cosmic Paranoia Talismans, various Heroic Souls, X Factor Eddie and Fear to Eternity Eddie!

The Halloween Soul is a limited time event soul which guarantees a 3★ to 5★ character of any class. This soul has an increased chance of summoning Halloween themed characters.