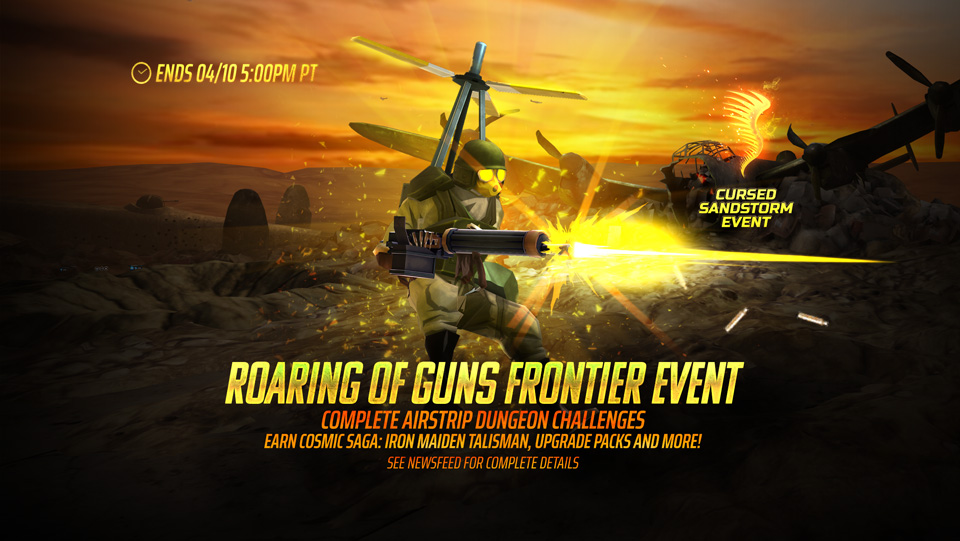 From now until April 10th at 5PM PT, complete Event Challenges in the Airstrip Frontier Dungeon to earn a variety of rewards, including Classified Parcels, Musical Awakening Shards, Egyptian Gemstones and more!

Cosmic Saga: Iron Maiden Talisman increases stats and reduces all damage, and has the following effects:

For each other alive Iron Maiden album character with a Saga: Iron Maiden talisman, remove all beneficial effects, including Golden and Innate effects, from up to one random enemy with a Crave Effect at the start of your turn. Then inflict Unblockable Stun for 1 turn on them and deal a hit of devastating physical damage to all other enemies if an effect is removed in this way.
• T1+: Inflict Innate Crave for the duration of the battle to a random enemy after an action, once per turn.
• T2+: For each negative effect, including Silver effects, on self, deal a hit of physical damage and inflict Bleed and Taunt for 6 turns on a random enemy after an action, once per turn.
• T3: Remove all beneficial and negative effects, including Silver, Golden, Unblockable and Innate effects, from self, heal up to MAX HP, gain Innate Vanish for 3 turns and inflict Innate Sleep on all enemies for 1 turn when you reach 1 HP for the first time.

Once it is unlocked, the Airstrip Dungeon will be open for only 1 hour total. There are no limits on how many times the dungeon can be played within that time frame. This dungeon is restricted to Assassin and Gunner characters that are 3★ or lower.

We have just added a second difficulty setting to this dungeon, so you can now take on both regular AND Hard settings. You can now gain progress on all Airstrip Dungeon achievements on both Normal and Hard difficulties!

All subsequent victories are guaranteed to provide XP Runes, as well as a chance of bonus rewards, including Venom and Radiant Talismans on normal, and Prudence and Envious Talismans on Hard.

**IMPORTANT: If you summon another Airstrip Frontier Key Soul while the corresponding Dungeon is already open you will refresh that dungeon’s countdown timer.