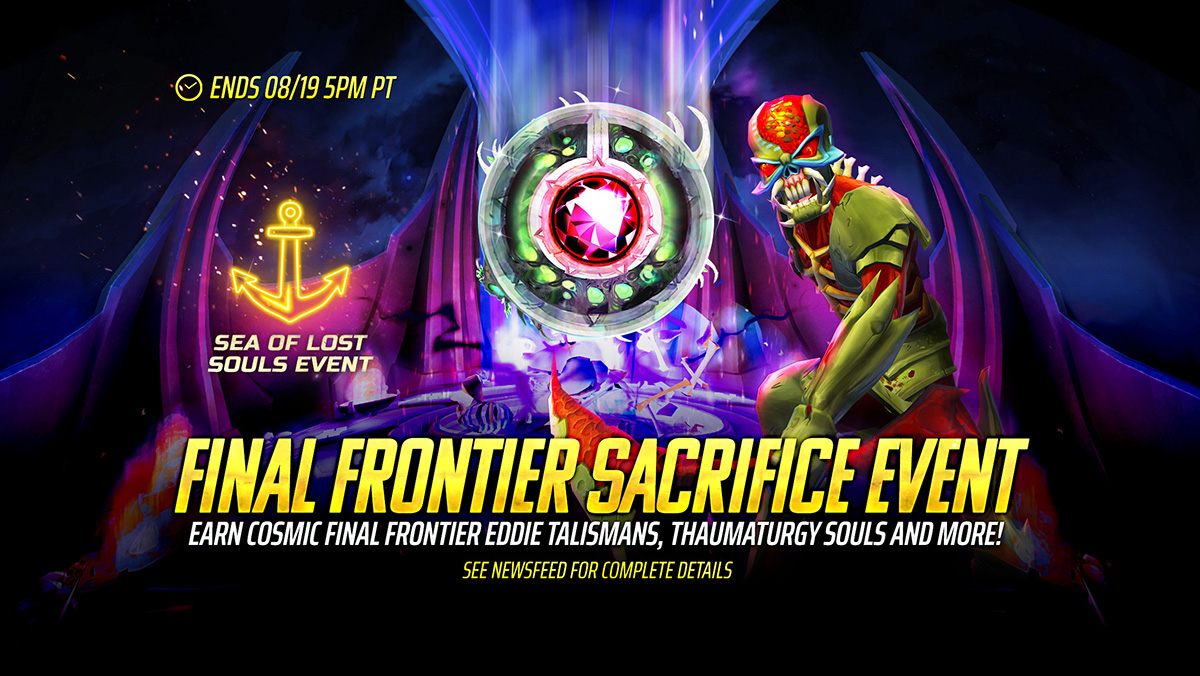 From now until August 19th at 5PM PT, earn bonuses from each tier of Sacrifice, in addition to normal sacrifice rewards.

Immune to Freeze, Doom, Dark Ghost, Apparition and Max HP Reduction effects. Permanently Increase Max HP on self by +100%. Cannot take more than 5% of MAX HP as damage from any single attack. Gain a Random Offensive Effect, including Golden effects, for 2 turns and Reduce Healing by 90% on attacking enemies until they die when you take damage. Remove All Negative Effects, including Silver and Unblockable effects, from self, Gain up to 10 Random Golden Effects for the duration of battle and become Immune to Damage and All Negative Effects, including Silver and Unblockable effects, for 1 turn when you reach 1 HP for the first time in battle.

Thaumaturgy Souls are a brand new Soul that will be featured in every Sacrifice event moving forward. When summoned, these Souls will randomly give one T1-T3 Purple, Gold or Red Cosmic Talisman with the Alchemy set-effect!

This set effect will:

Grant Invincibility to all allies for the first turn of battle. Transform Negative Effects on all allies into Beneficial Effects every turn. Permanently Reduce a random stat on all enemies by 5% every time you attack.

BONUS: For the duration of this event, Satellite 15 has a chance of dropping Alchemist Soul Fragments

Complete regular and Clan based Challenges to earn a variety of rewards including various Awakening Shards, Child of the Damned Fragments and Shipwrecked Soul Fragments.

Shipwrecked Fragments are the event currency of our overarching Sea of Lost Souls event that is running through August.