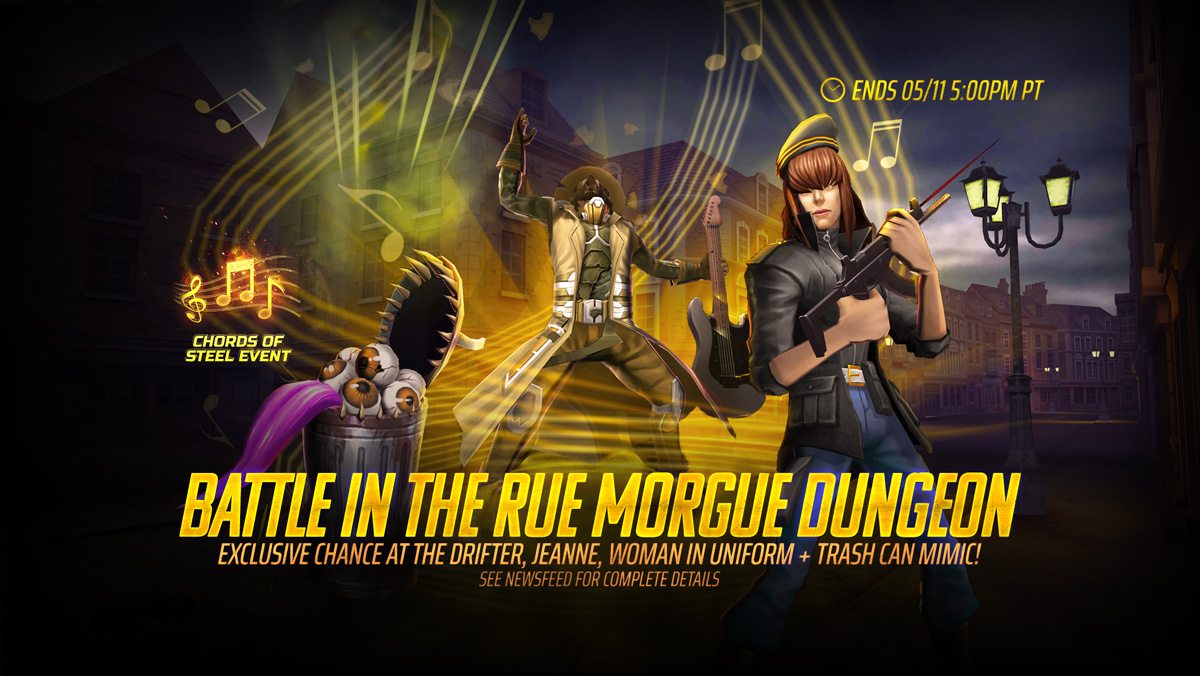 04 May The Ruse of the Rue Morgue (Dungeon) – Exclusive Chance at 3 new characters!

Battle in our newest dungeon for a chance at 3 new characters:

The Drifter (5★ Gunner): Power chords never hit so hard. The Drifter supports his team by giving them Perfect Accuracy and inflicting Perfect Disable on enemies.

Trash Can Mimic (5★ Assassin): Straight from the mean streets of Night City, the Trash Can Mimic protects himself with Reflect Shields and takes enemies down with Toxic Burns and Time Bombs.

Jeanne, Woman in Uniform (5★ Magus Cosmic): She’s armed to the teeth and is able to Mark and Exhaust her foes. Her Cosmic status means she has class advantage against every enemy and has NO talismans slot class restrictions. Jeanne is a RARE find – She is only obtainable as a random summon from Quandary Souls.

Can you solve the Ruse of the Rue Morgue? From now until May 11th, 5 PM PT, battle in the Rue Morgue dungeon! This dungeon comes with a limerick filled story, 4 difficulty settings and is packed with awesome rewards!

Conundrum Currency can be traded in store for Quandary Souls in bundles of 1, 3 and 10, and TWO characters – The Drifter and the Trash Can Mimic!

Cancer Talismans are a blue talisman with a 3-set effect. Equipping this set will do the following:

Remove and Prevent all Immunity and Shroud effects, including Golden effects, to a random enemy until they die at the start of battle and at the start of your turn. Grant Damage Reduction Shield for 1 turn to all allies after each action.

Chance to instantly gain Energy and an Extra Turn after each action. Remove Immunity and Perfect Immunity from all enemies and inflict Attack Down and Magic Down on them for 1 turn at the start of battle and after every action.

The Quandary Soul is a limited time event soul which guarantees a 3★ to 5★ character of any class. This soul has an exclusive chance of summoning 5★ Gunner Drifter,  5★ Assassin Trash Can Mimic and the  5★ Magus Cosmic Jeanne, Woman in Uniform.