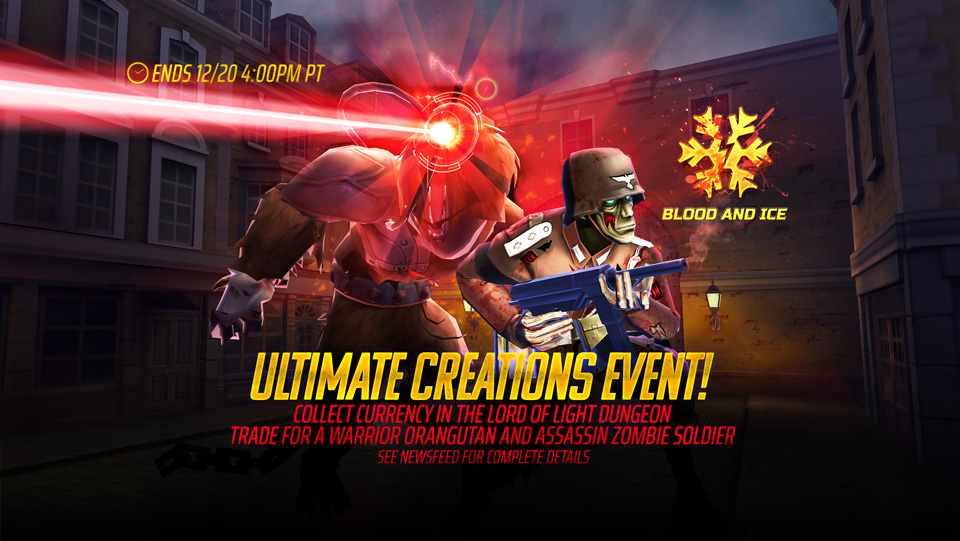 From now until December 20th, 4PM PT, each battle in the Lord of Light dungeons has a chance of dropping Canopic Jars, the Ultimate Creations event currency. Collect 200 and you can redeem them in the Event Store for your very own 4⭐Warrior Orangutan or 4⭐Assassin Zombie Soldier!

Orangutan: This cybernetically enhanced primate deals out physical damage and inflicts Cleave and Bleed on all enemies. If he takes damage he’ll gain a Stone Shield and Ascension!

Zombie Soldier: This gruesome battlefield ghoul can withstand punishing assaults with his passive ability Undead Fortitude. This passive makes him Immune to Permadeath, gives him Endure for the duration of battle and has a 30% chance to revive him should he die!

This 4⭐Ally event will also feature 3 Event Challenges which will reward a variety of items including XP Shards, Frontier Keys and Bloodied Snowballs.

You can learn more about this featured event in the Blood and Ice event post here!

All Lord of Light dungeons will also have a 3x chance of dropping Rare Souls! Don’t miss out on this opportunity to get more Rare Souls while getting your guaranteed 4⭐ character!