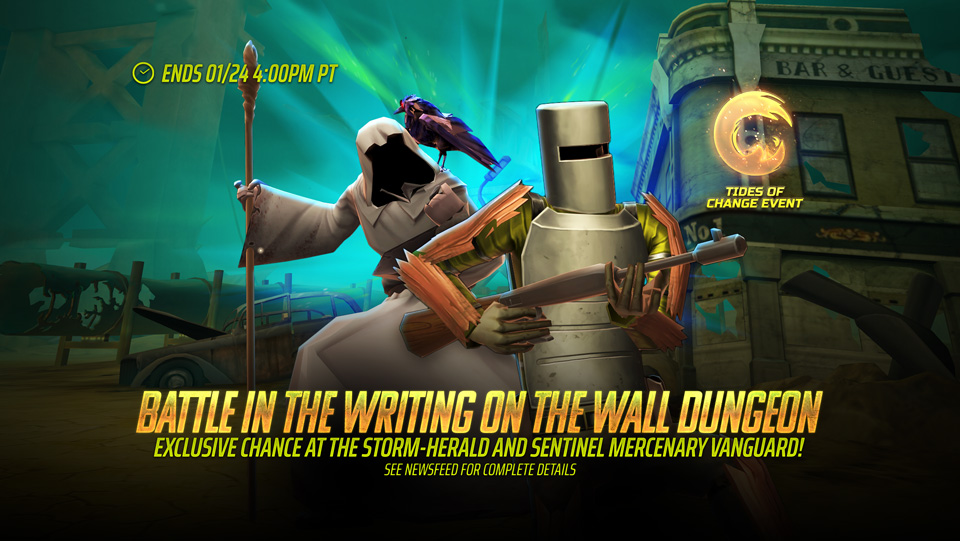 Prophecies tell of a singular moment in the not-so-distant future, wherein the storm will gather, and the Heralds will be called upon. Some others conflate this with prophecies surrounding the legendary four horsemen of the apocalypse. Regardless, the truth is that the Storm Riders are said to be proceeded by a single mysterious individual of incredible strength: the Storm-Herald. Brandishing an ancient ring containing the power of an eternal’s shard, players will be able to unleash a torrent of magic on their opponents with this powerful new ally.

From now until January 24th, 4 PM PT, battle through 4 difficulty settings in the Writing on the Wall dungeon!

Coveted Currency
Dungeon Fragments
A chance of up to 2 bonus rewards, including: [B]Courage Talismans (Safeguard Subtype)[/B]

Coveted Currency can be traded in store for packs of Burning Sky Souls, Cosmic Viking Talismans, plus our two featured characters – The Storm-Herald and Sentinel Mercenary Vanguard.

The Burning Sky Soul is a limited time event soul which guarantees a 3★ to 5★ character of any class. This soul has an exclusive chance of summoning 5★ Cosmic The Storm-Herald and 5★ Sentinel Mercenary Vanguard.