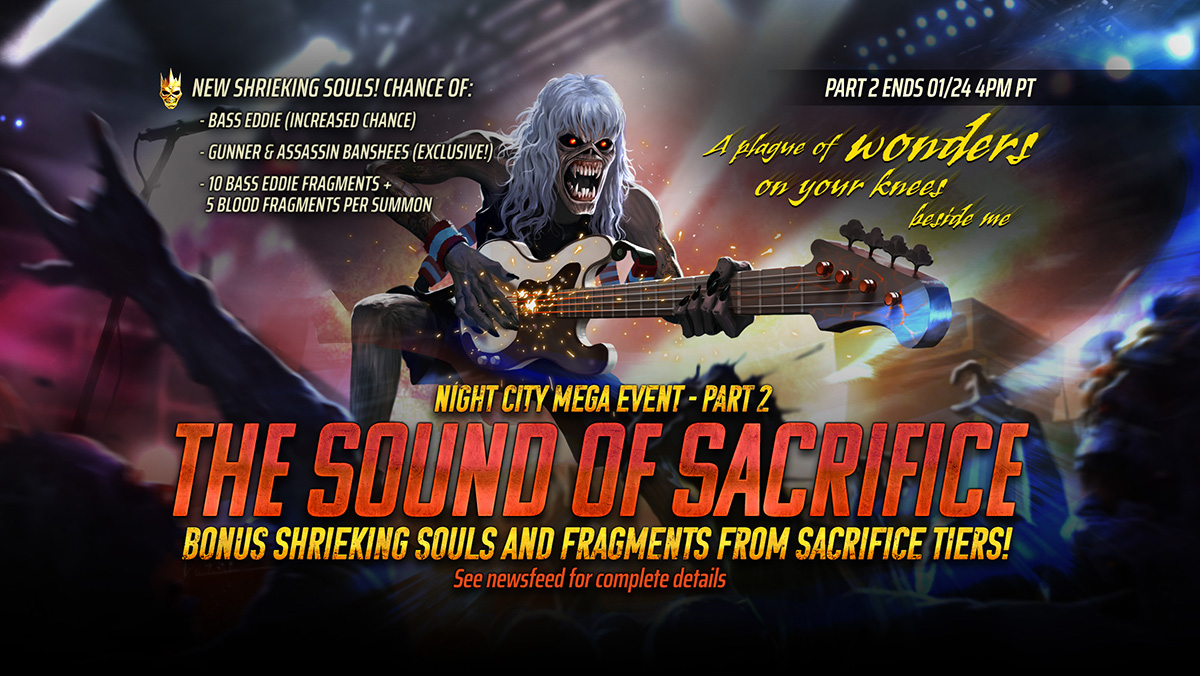 17 Jan Gallop into battle with Bass Eddie! New Legacy of the Beast Sacrifice event on now!

The second part of the Night City Mega Event has just begun!

From now until January 24th, 4 PM PT, Shrieking Souls and Shrieking Soul Fragments are event rewards that appear as a bonus from Sacrifices, in addition to normal sacrifice rewards:

Shrieking Souls can also be purchased for Ironite in packs of 1, 3 or 10.

The Shrieking Soul is a limited time event soul which guarantees a 3★ to 5★ character of any class. It also gives an increased chance of receiving Bass Eddie, and the Magus and Sentinel Banshee, as well as an EXCLUSIVE chance at earning the Gunner and Assassin Banshee.

Banshee ( 4★ Assassin) – A hybrid damage reviver that grants her allies a chance to avoid all damage when hit.

Banshee (4★ Gunner) – A powerful negative effect caster capable of removing beneficial effects from opponents that deal damage to her and inflicting devastating negative effects on the enemy team, while buffing her allies.

The Assassin and Gunner Banshee are ONLY available in the Shrieking Soul. While these characters will occasionally be featured in Heroic Soul Rotations, they will NOT be added to any other Souls, making the Shrieking Soul your best shot at securing them.

These 3 characters are also earnable from all other souls that can drop a character of their specific rarity and class.

SPECIAL EVENT ADDITION: For the duration of the event, there are also new event challenges based around Sacrifice. Meet the requirements to earn Final Frontier Eddie Fragments, Epic Souls, Frontier Coins and more!